“Blue Monday,” the alleged gloomiest day of the year, occurs on the third week of January’s workday start. It is marked by two things: withdrawal of holiday season high spirits, and the onset of widespread seasonal affective disorder, or SAD. Throw in this week’s nor’easter and the nightmare state of our country, week one, and I’m going to go ahead and say that this dark, dark, cerulean period is going to extend a bit longer than 24 hours. 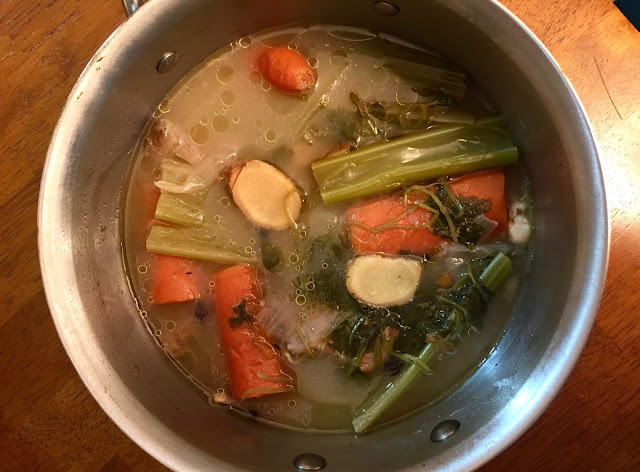 Winter-onset SAD is a real thing, marked by symptoms like irritability, tiredness, low energy, and heavy, leaden limbs. With our physical and mental energies down, it’s important to nurture our bodies more than ever. I can’t think of anything more heart and soul warming than a steaming cup of Chicken Bone Broth, consumed on its own or as the main ingredient in Egg Drop Soup or Lentil Soup. 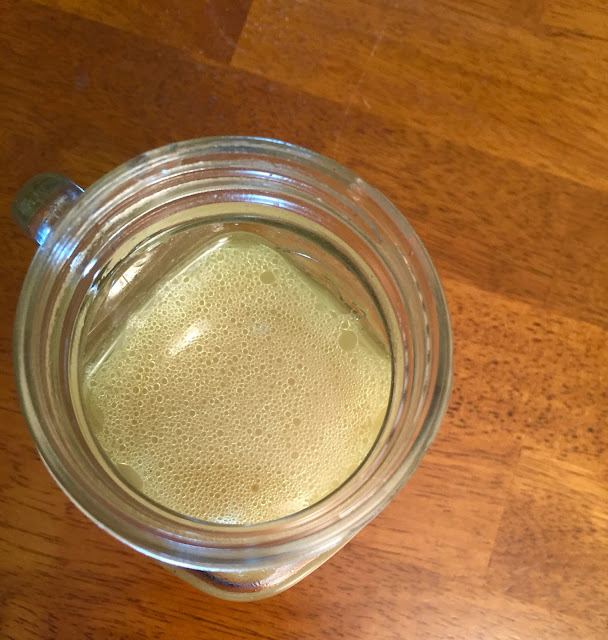 All three of these recipes come from the Annual Goop Detox, which, I have to admit, I was a bit hesitant to start at first. Words like “detox”, “cleanse”, and “elimination-diet” are really not my style—I’m more of a whole-ingredient, nutrient-rich eating gal who prefers general eating for health over restriction and discipline. 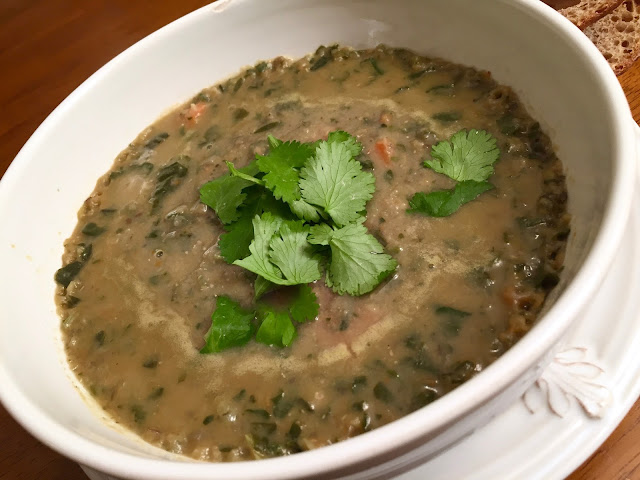 However, all of the recipes in the detox looked amazing, and I loved how GP reused ingredients and components for the different dishes. I didn’t commit to elimination-diet rules (no caffeine, no way!) but am currently making my way through each of the 14 dishes with utter delight. Roughly three-quarters through, I’ve immensely enjoyed the way that GP constructed “cozy-hot breakfasts, warm and filling dinners, and quick and simple lunches” to make clean eating feel natural in our current cold-weather climate. By the end, she promises a “lighter, happier, refreshed you.” A tall order for Blue Monday: Extreme Edition, but I truly felt all those qualities after two weeks of eating the meals. 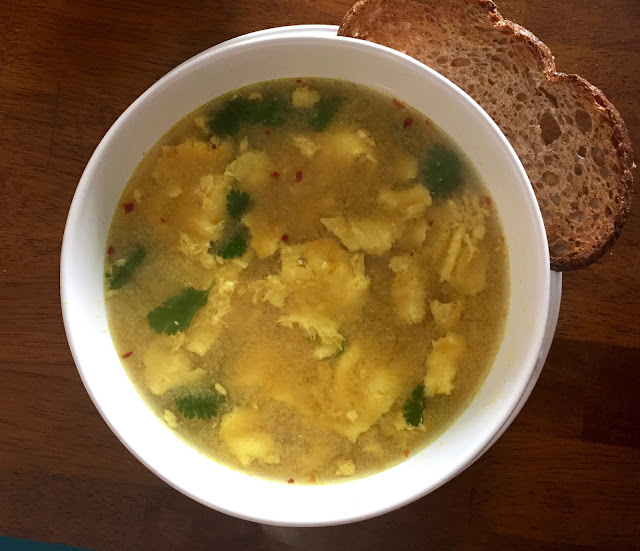 Many of the recipes in the Annual Detox have an Asian flare, and the Chicken Bone Broth is no exception. Simmered with ginger, star anise pods, cilantro, and apple cider vinegar, this broth exudes a lovely, spicy bite from these more exotic ingredients (in addition to common ones like celery, onion, carrots, and garlic). It is truly glorious on its own, and despite the recipe’s recommendation to cook for a total of 10 hours, ample flavor can be achieved in just 2-3. 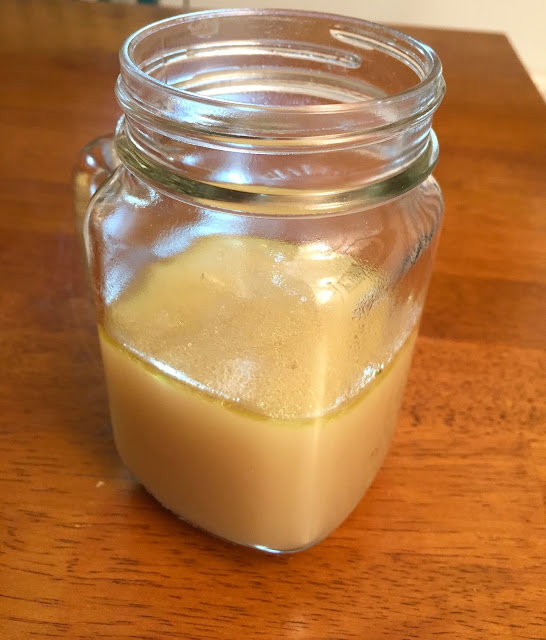 The Egg Drop Soup is simply a fortified version of the broth, adding turmeric, chili flakes, more ginger, lemon juice, and a single egg for a protein-rich, inflammation-fighting, citrusy enhancement. It’s lovely, and ribboning the eggs was so fun! (Though my soup looks more like a weird floating omelet because I used two eggs and apparent have terrible ribboning form). GP even recommends this soup for breakfast, and its light enough to fit the bill. 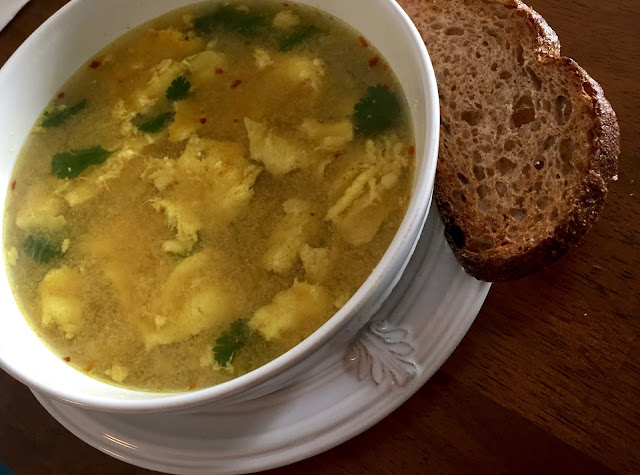 The Lentil Soup is a fairly basic recipe, but exalted to Best-I’ve-ever-had status through use of the bone broth. Two kinds of lentils, puy and red, give legume depth and variety, which are cooked simply with garlic, carrot, and celery before blended with a quick grate of fresh ginger and the broth. The bite from the ginger is a really nice complement to the earthy lentils, and I added some frozen chopped spinach and red wine vinegar for extra gusto, too. 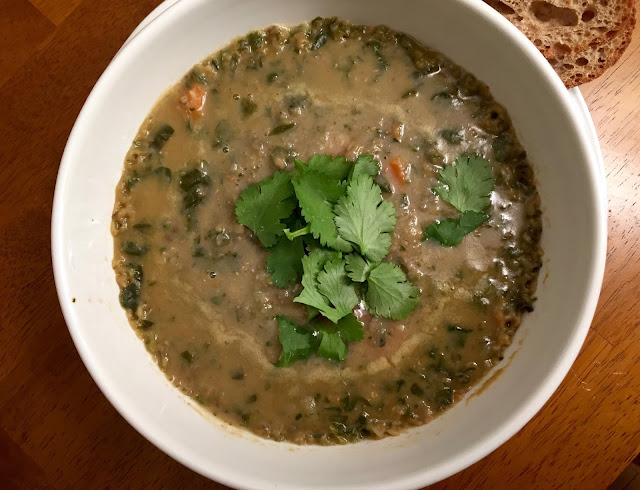 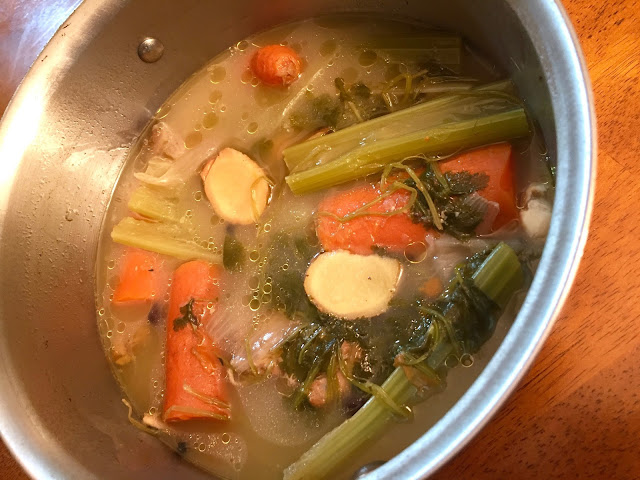 At first, I was struck by how ironic it was that I was getting such pleasure from these pure, simple foods. I literally felt like I was indulging, as if I were drinking a glass of red wine and eating a rich chocolate cake. But the more I thought about it, the more it made sense. My body, mind, and spirit are trying to heal. And while I can’t control what goes on outside of me—whether that be the weather or the president—I can take charge of what I put inside of me. And here is the only place to start.

Directions:
1. Combine all ingredients in a crockpot and cook on low heat for 6* hours. Remove meat from chicken, shred, and store until ready to use.
2. Return the chicken bones to the crockpot and continue cooking for 4 more hours.
3. Strain, cool, season to taste with salt, and store in the fridge.

*2 to 3 hours of cooking, total, is perfectly adequate.

Directions:
1. Combine the bone broth, ground turmeric, chili flakes, and grated ginger in a small saucepan over medium heat.
2. While the mixture heats up, crack the eggs in a small bowl, season with a pinch of salt, and beat with a fork.
3. When the broth is simmering, pour the egg through the holes of a slotted metal spoon directly over the broth, making egg ribbons.
4. Season to taste with salt and pepper and squeeze over some fresh lemon juice just before serving. Garnish with cilantro sprigs, if desired.

Directions:
1. Heat olive oil in a medium dutch oven over medium heat. Add onion, carrot, and celery and cook for 5 minutes. Add garlic and cook another 2 minutes.
2. Add lentils, broth, and ½ tsp salt. Bring to a boil, then reduce to a simmer, cover and cook 20-25 minutes (or until the lentils are cooked but still have some bite), stirring occasionally.
3. Remove pot from heat and let cool for at least 5 minutes. Add the fresh grated ginger and 2 cups bone broth to the pot. Blend together with an immersion blender. Add spinach, if using. Serve with a drizzling of red wine vinegar.
Posted by KvellintheKitchen at 9:41 AM 1 comment:

I recently read a great article by Chrys Napolitano about rising to the challenge of staying locavore during the winter months.  Recognizing urban local winter eating as neither easy nor haphazard, she relayed a few simple rules in Edible Bronx for practicing the sustainable philosophy. 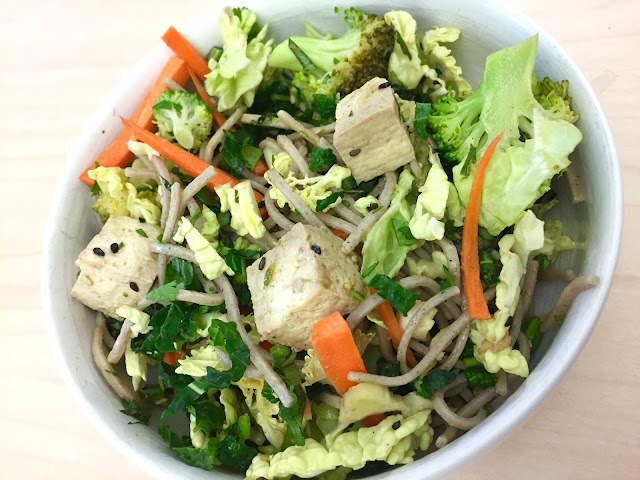 First and foremost, plan ahead. Her article was riddled with tips for freezing, pickling, and dehydrating late autumn produce. As we’ve clearly missed the boat on this one, I’ll relay two principles that stuck with me and are actionable right now.  First, know what’s in season. For New Yorkers, cabbage, cauliflower, root vegetables, winter squash, dried beans, apples, pears, arugula, baby spinach, and baby kale are produced steadily throughout the winter. Did you know that just shy of two dozen GrowNYC Greenmarkets are open year-round? 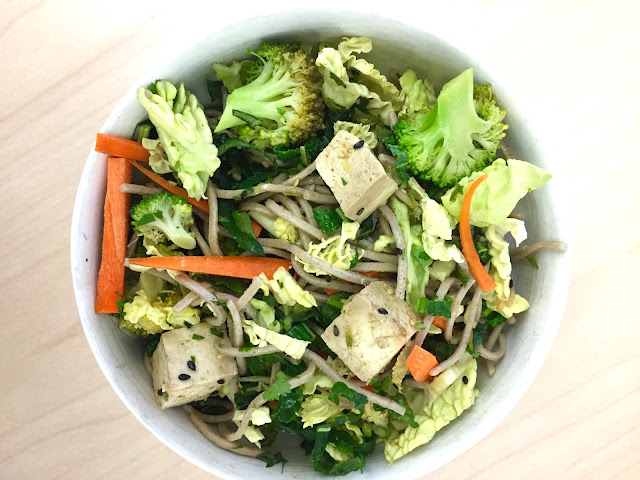 Second, accept that compromise is ok. Certain produce, such as citrus, avocados, nuts, and olives, will never be local in the tri-state area. “Don’t sweat it!” Chrys emphasizes.  Noted, and the perfect segue into this Citrus Ginger Tofu Salad with Buckwheat Soba Noodles recipe. 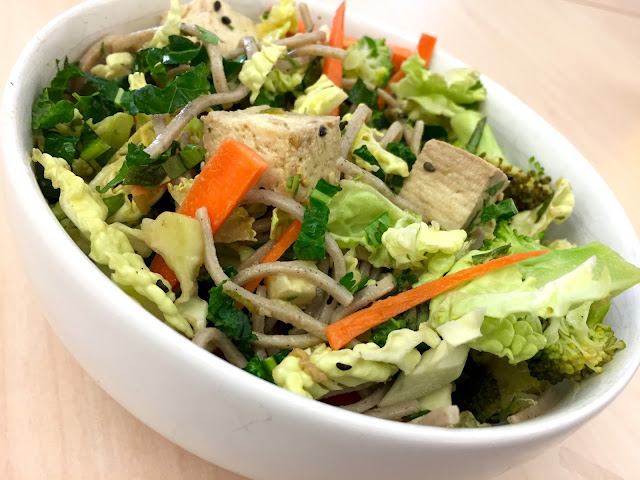 Starting with local kale, carrots, and cabbage, this salad boasts an A+ on the nutrient and crunch scale; broccoli florets contributing to the attractive texture/nutrition profile, too.  Add delightfully smooth, earthy soba noodles and crisp tofu squares— enveloped in an Asian citrus dressing that hits every flavor nuance imaginable—and this salad is simply sensational. The marinade for the tofu consists of orange juice, soy sauce, sesame oil, ginger, garlic, maple syrup and cayenne and is repurposed for the salad's dressing; perked up with added citrus and acidity through lime, rice wine vinegar, and extra orange juice. Garnished with basil, cilantro, and sesame seeds, the salad is sprightly and animated; a triple-the-recipe dish for sure. 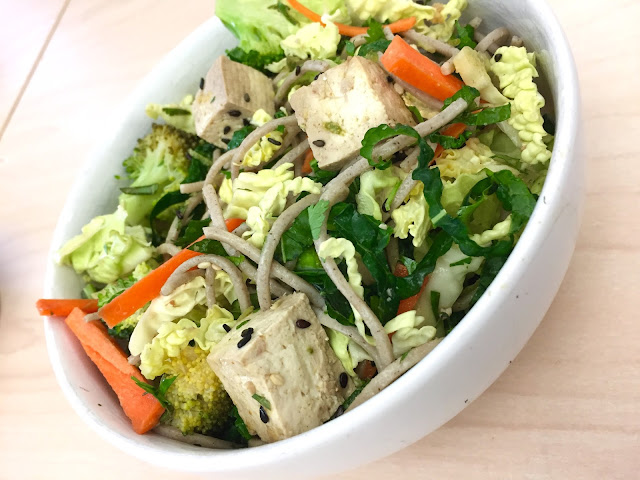 I’ve made this salad a few times, once substituting chicken breast for tofu, which works just as well. I definitely recommend doubling or tripling the marinade/dressing, as if you are like me— using the entire bunch of kale and whole head of cabbage because it's there, that is—your salad will be underdressed.  A quick note: 100% buckwheat soba noodles (which make this recipe gluten-free, in addition to using tamari instead of soy sauce) are expensive, about $8.99 a package. However, combination buckwheat and regular wheat noodles run at a much more reasonable price point, comparable to regular spaghetti. 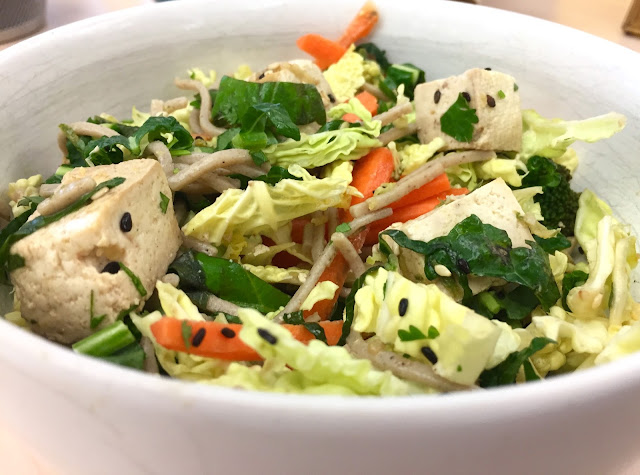 So while native citrus will always be a no-go in the Empire State, you can reduce food miles by aiming for domestic citrus rather than that grown in South America. Florida is in citrus season right now.  We’re just in cold and flu season, so I’m thinking it’s definitely a good time to get a healthy dose of that vitamin C.  Plus, simply being locally mindful—even if you’re not practicing with diligence—counts for something, for sure.

Directions:
1. Preparing the Tofu + Marinade: Preheat the oven to 350 degrees Fahrenheit. In a bowl mix together orange juice, tamari, sesame oil, olive oil, ginger, garlic, maple syrup, and cayenne and set aside. Cut the tofu into 1-inch cubes and place into a small baking pan without overlapping. Pour the marinade over the tofu. Put the tofu into the oven and bake for 15 minutes, stir, and bake for 15 minutes more until browned. With a slotted spoon, scoop out the tofu and place onto a plate and allow to cool. Pour the remaining marinade into a bowl and set aside.

2. Preparing the Thai citrus vinaigrette: Add the lime zest and juice to the remaining marinade. Continue to add the orange juice, rice vinegar, and sea salt to taste. Set aside.

3. Preparing the salad: Cook the soba noodles as described on the package, rinse with cold water and set aside. Meanwhile, bring a small pot of water to a boil, and blanch the broccoli florets for 30 seconds. Immediately strain the florets and rinse with cold water. Put the noodles, blanched broccoli florets, carrot, kale, cabbage, cilantro, basil, and sesame seeds into a large bowl and toss. Dress the salad with the Thai citrus vinaigrette.

4. Serve the salad topped with baked tofu and garnished with sesame seeds (and peanuts, if desired).

*Optional. De-ribbing kale takes so long, and in my book, no one notices the absence of said ribs except yourself. Skip if you're crunched for time.
Posted by KvellintheKitchen at 2:50 PM No comments: