I usually live on salads with fruit in the summer, and this stretch of disgusting New York snow and slush has  me longing for anything I can associate with warm weather.  Last night I threw together a curried tuna salad with apples and dried cherries, and it (temporarily) did the trick!  The combination of spicy from the mustard and horseradish and sweet from the fruits blend nicely together, and throwing in some dill at the end adds a freshness to the dish.  Lastly, using half canola-based light mayo and half plain greek yogurt preserves the traditional creaminess associated with a good tuna salad, but significantly cuts the calories, saturated fat and cholesterol. 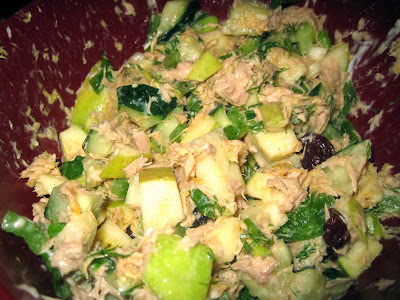 *The 411 on Canned Tuna
Not all canned tuna is created equal!   Some tuna fisheries use non-sustainable fishing methods that are harmful to both the tuna population and the environment. Try to stick to "troll" and "pole-and-line" caught tuna, which limits bycatch-catching other threatened species of sea life like sea turtles and sharks- rather than wild-caught tuna, which tends to generally have a large amount of bycatch. Albore tuna populations are best from the US and British Columbia, while skipjack tuna is generally healthy worldwide.

Want to know more about sustainable seafood? Check out Monterey Bay Aquarium's Seafood Watch Pocket Guide, designed specifically for you by region. Just click on the area you live in for easy and portable access to the most ocean-friendly fish near you.