For my birthday I received the cookbook Plenty, the vegetarian brainchild of Jerusalem author Yotam Ottolenghi. This cookbook could not be more up my alley. Organized into sections by vegetable type, each recipe expertly showcases its main ingredient, yielding dazzling and vibrant dishes abounding with Mediterranean spice and zest. 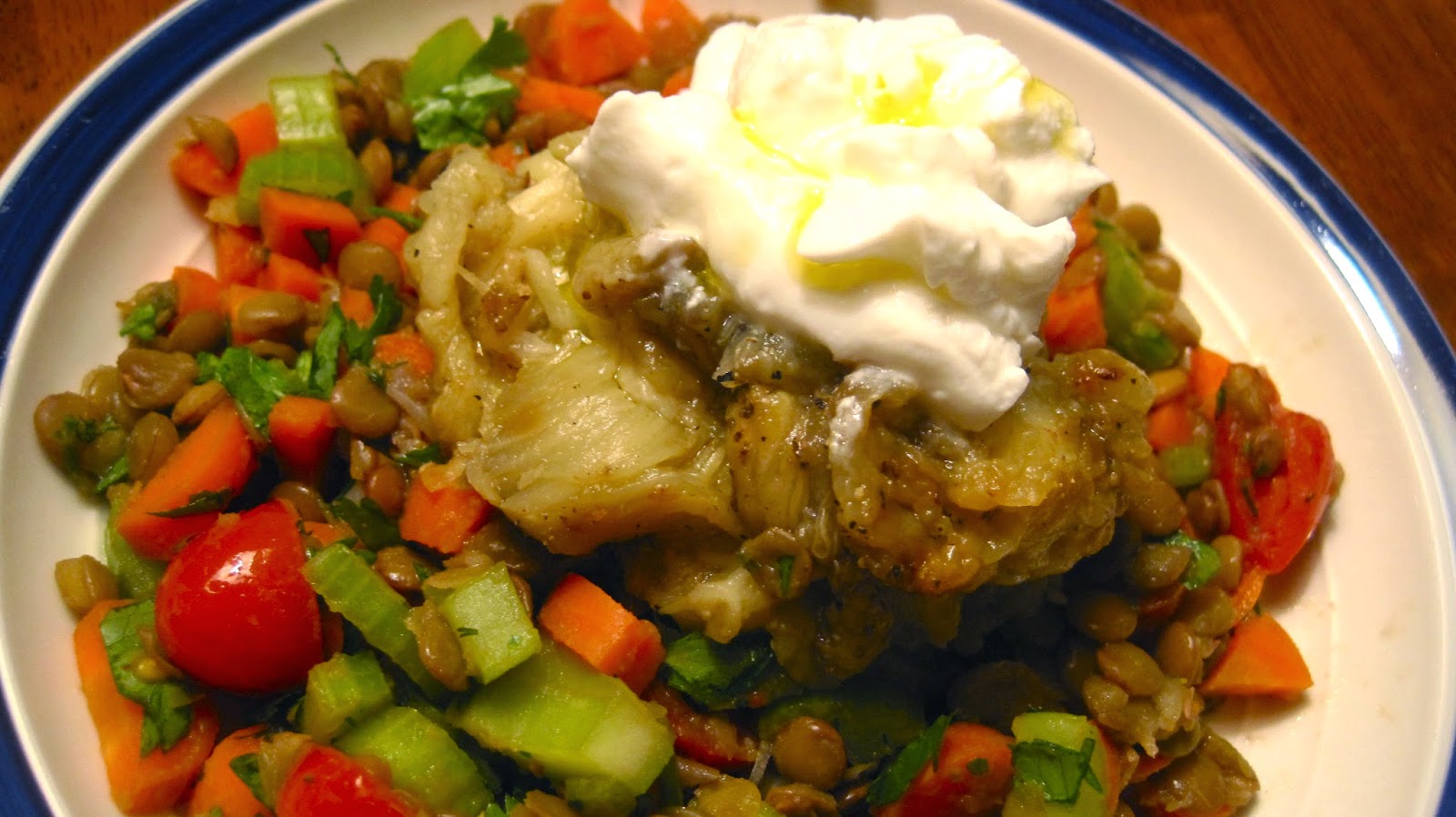 The entire cookbook looks spectacular, so picking which recipe to tackle first made for an extremely difficult decision. After much thought, I settled on Ottolenghi's Lentils with Broiled Eggplant. And if all of his recipes are great as this one, I am seriously going to pull a Julia & Julia and concoct a new recipe every single day until I've gone through the entire book. (Rachel & Yotam has a nice ring to it, don't you think?) I'm that hooked! 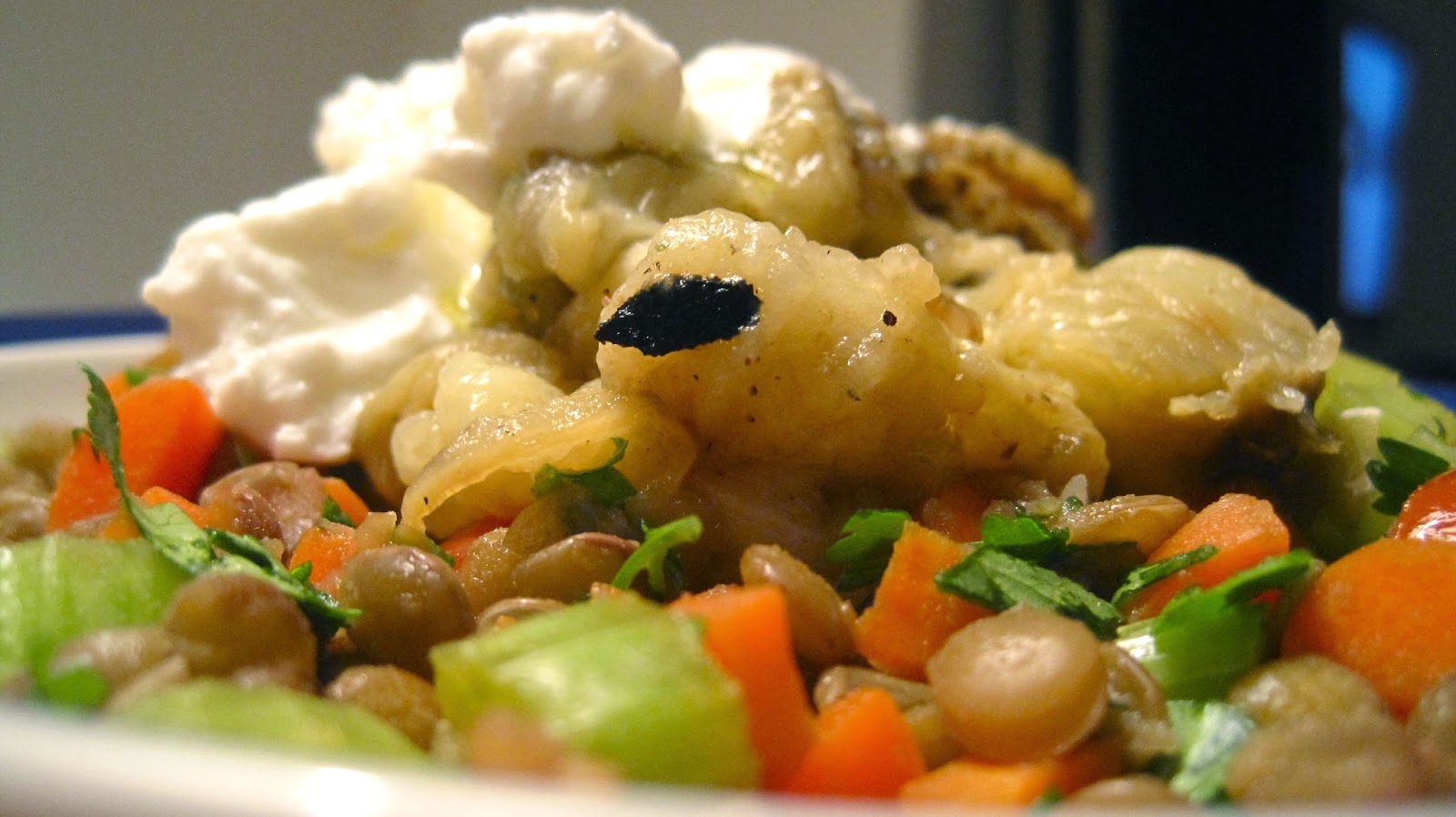 I settled on this particular recipe because I wanted something hearty and warming; a seasonally appropriate winning main dish as opposed to a side. As I examined the recipe, I was thrilled to see that Ottolenghi recommended executing the slow-cooked eggplant—one of my favorite things in the world—via gas stovetop and then oven-broil. As a NYC dweller who constantly pouts over my inability to own a grill (despite loving my gas stove), this was a dream come true: perfect smoky, char-grilled taste achieved sans grill! The secret, Ottolenghi writes, is cooking the eggplant directly on the flame; burning the skin immediately and then letting the flesh oven-cook slowly inside the charred exterior so the flavor seeps through.  It is SO good. My only critique of this recipe is to double the amount of eggplant, because you're definitely going to be wanting more. 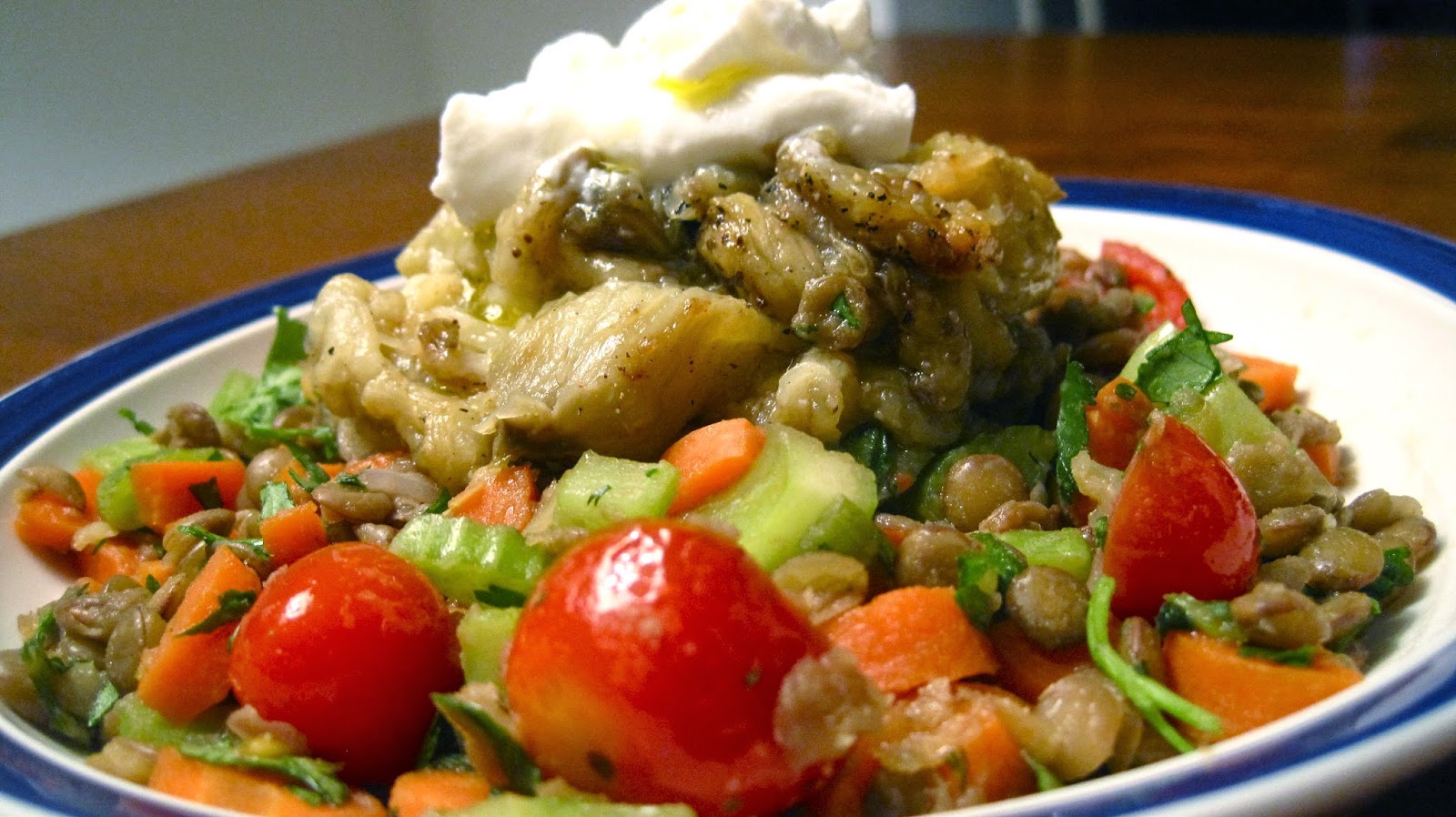 Although it's clearly the eggplant that shines in this recipe, the lentils are its perfect foil. Simmering in a homemade stock of onion, carrot, celery and thyme gives them a rich base flavor, while 3 kinds of fresh herbs and crunchy chopped vegetables really make them pop. The lentils are finished with tangy red wine vinegar and smooth olive oil, a lovely acidic contrast to the smoky eggplant. 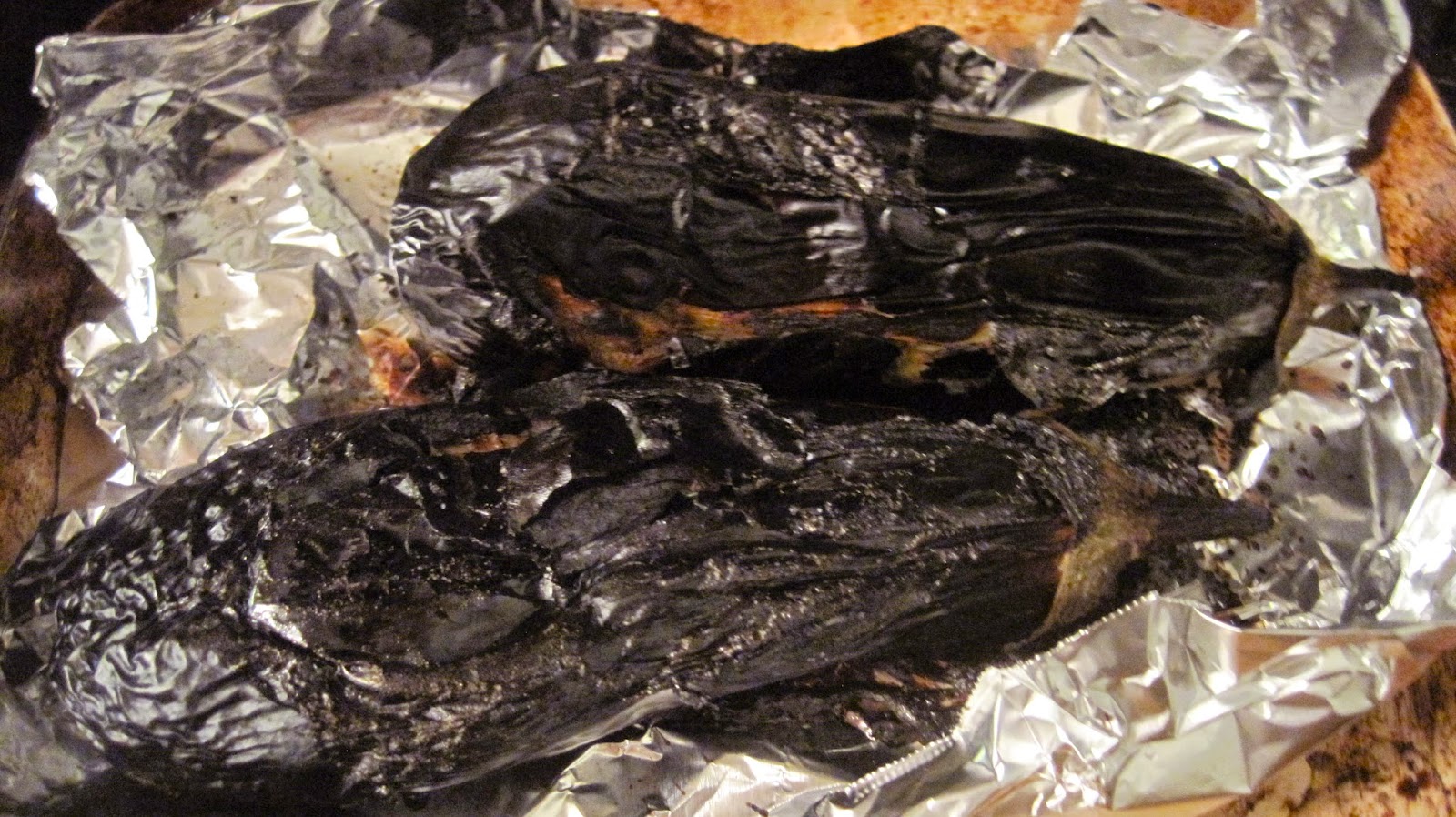 Last but not least, don't forget the final step: topping the entire concoction with a generous dollop of Greek yogurt. The thick creamy yogurt drizzled with EVOO really brings the whole dish together: a blissful trio of textures, flavors, and fine fettle. 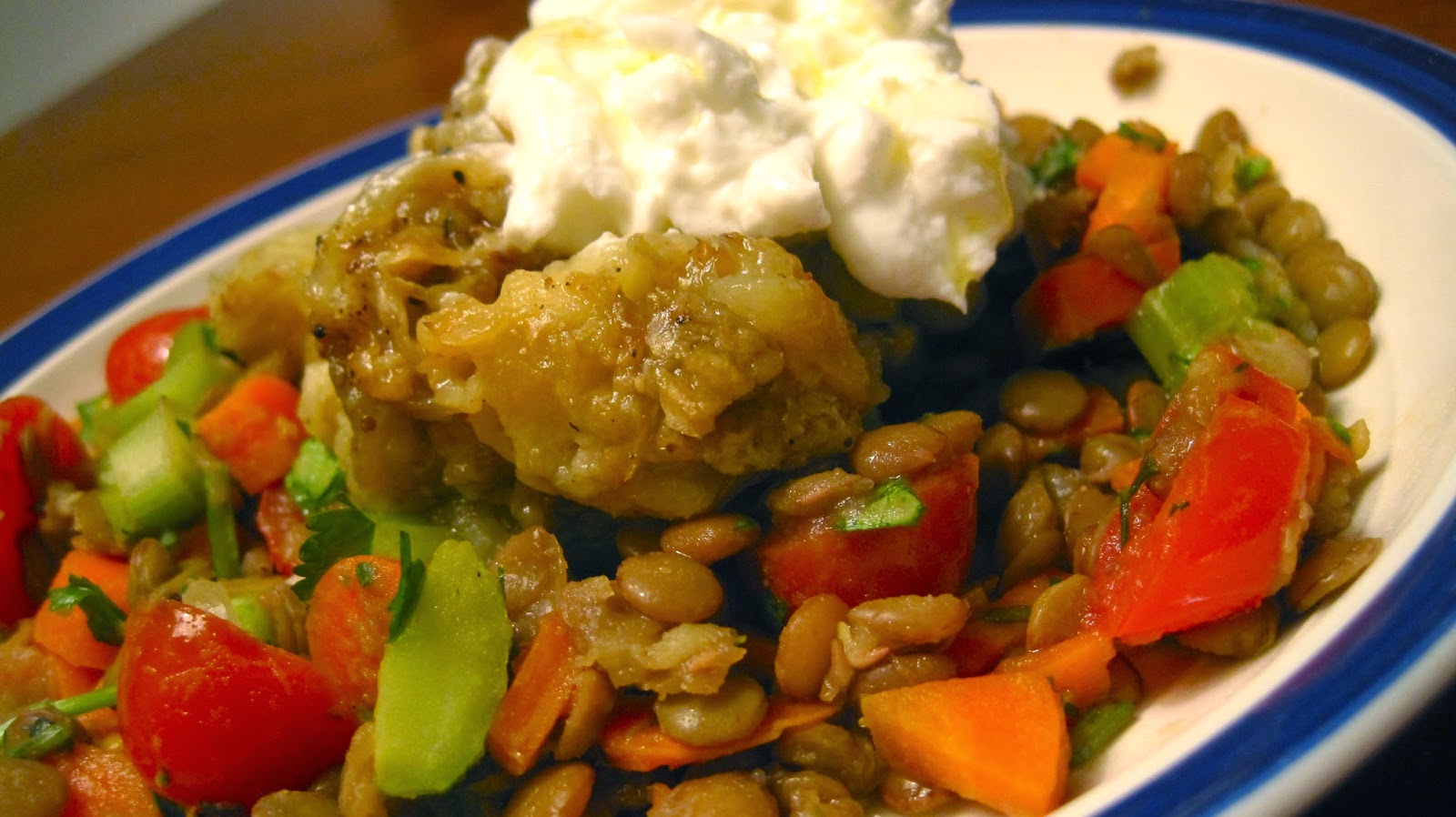 Lentils with Broiled Eggplant (from Plenty)
Serves 4
NOTE: Make sure to pierce the eggplant before broiling to prevent exploding.
Ingredients:
2 medium eggplants (I suggest using 4 large)
2 tbsp top-quality red wine vinegar
salt and black pepper
1 cup small dark lentils (such as Puy or Castelluccio), rinsed
3 small carrots, peeled
2 celery stalks
1 bay leaf
3 thyme sprigs
1/2 white onion
3 tbsp olive oil, plus extra to finish (I only used 2)
12 cherry tomatoes, halved
1/3 tsp brown sugar
1 tbsp each roughly chopped parsley, cilantro and dill
2 tbsp crème fraîche (or natural yogurt, if you prefer)
Directions:
1. To cook the eggplants on a gas stovetop, which is the most effective way, start by lining the area around the burners with foil to protect them. Put the eggplants directly on two moderate flames and roast for 12 to 15 minutes, turning frequently with metal tongs, until the flesh is soft and smoky and the skin is burnt all over. Keep an eye on them the whole time so they don’t catch fire. For an electric stove, pierce the eggplants with a sharp knife in a few places. Put them on a foil-lined tray and place directly under a hot broiler for 1 hour, turning them a few times. The eggplants need to deflate completely and their skin should burn and break.
2. Remove the eggplants from the heat. If you used an oven broiler, change the oven to its normal setting. Heat the oven to 275°F. Cut a slit down the center of the eggplants and scoop out the flesh into a colander, avoiding the black skin. Leave to drain for at least 15 minutes and only then season with plenty of salt and pepper and 1/2 tablespoon of the vinegar.
3. While the eggplants are broiling, place the lentils in a medium saucepan. Cut one carrot and half a celery stalk into large chunks and throw them in. Add the bay leaf, thyme and onion, cover with plenty of water and bring to the boil. Simmer on a low heat for up to 25 minutes, or until the lentils are tender, skimming away the froth from the surface from time to time. Drain in a sieve. Remove and discard the carrot, celery, bay leaf, thyme and onion and transfer the lentils to a mixing bowl. Add the rest of the vinegar, 2 tablespoons of the olive oil and plenty of salt and pepper; stir and set aside somewhere warm.
4. Cut the remaining carrot and celery into 3/8-inch dice and mix with the tomatoes, the remaining oil, the sugar and some salt. Spread in an ovenproof dish and cook in the oven for about 20 minutes, or until the carrot is tender but still firm.
5. Add the cooked vegetables to the warm lentils, followed by the chopped herbs and stir gently. Taste and adjust the seasoning. Spoon the lentils onto serving plates. Pile some eggplant in the center of each portion and top it with a dollop of crème fraîche or yogurt. Finish with a trickle of oil.
Posted by rachelinthekitchen at 12:20 PM