Okay cauliflower, let's talk about you and your fancy facades. First, you masqueraded as a large, beefy steak.  Now you’re tiny and mighty, disguised furtively as couscous!? Proving once again that our cruciferous friend is indeed the most chameleonic vegetable out there, I hereby present to you this recipe for Spice Merchant Cauliflower Couscous with Shrimp and Snow Peas. 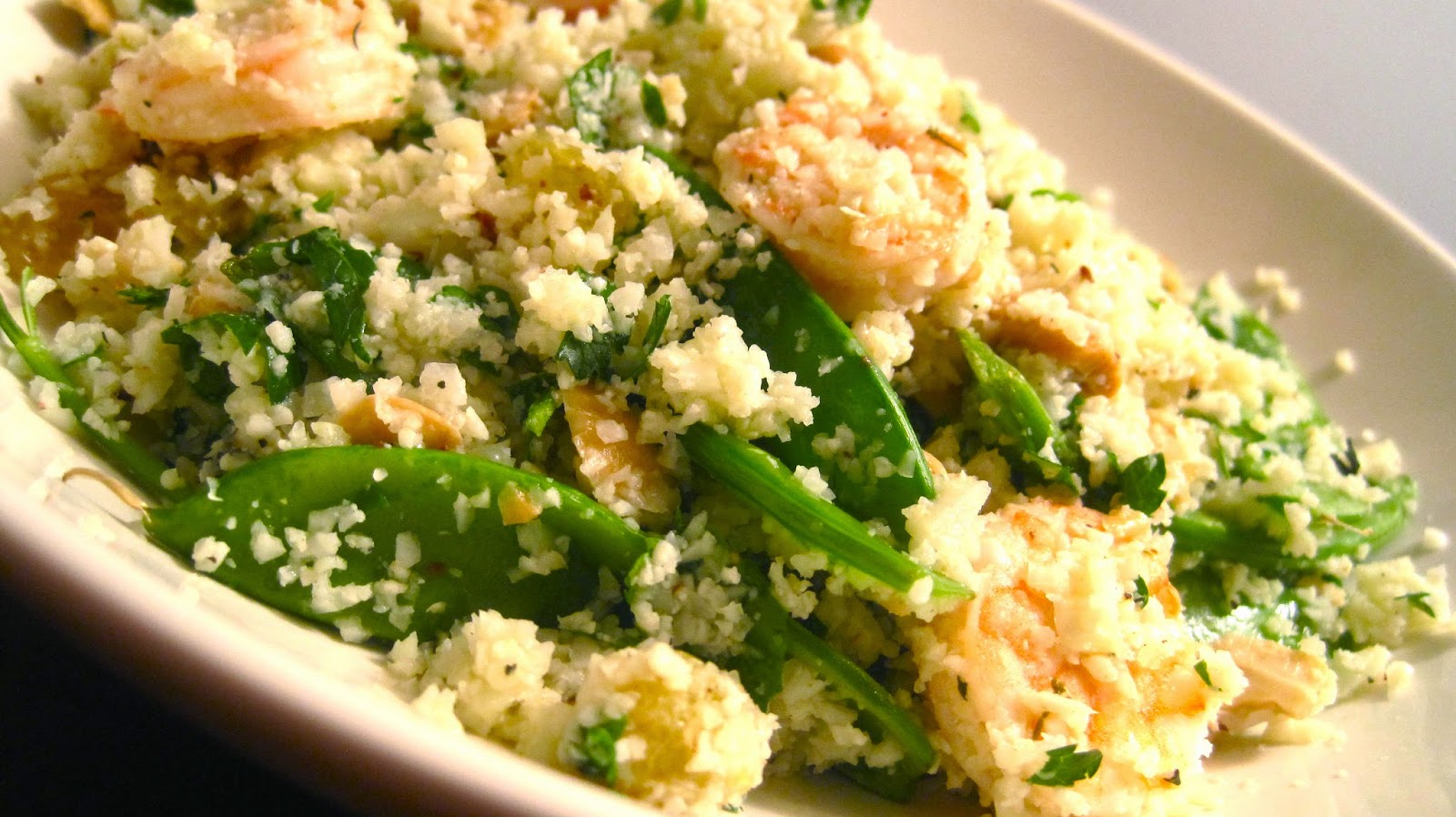 The concept of cauliflower couscous is plenty enchanting on its own. Ten seconds of food processor pulsing creates uniform kernels, which are then pan-sautéed for a mere 7 minutes to produce a soft, fluffy grain that’s indistinguishable from real couscous—except that it’s one-tenth the calories. But the remarkable couscous is just the first of many surprising standouts in this dish. Next we have the Middle Eastern spices, featuring newcomer za’atar; on top of that, adorning jewels of sultanas and cashews. Maybe it's because I just saw Aladdin on Broadway, but the phrase "spice merchant" is running wild through my imagination... I totally picture these spices, dried fruits, and nuts at Aladdin's marketplace—bartered but more likely stolen, of course—for this dish, worthy of the Sultan of Agrabah! The spices feel almost luxurious, so distinctly Middle Eastern that you immediately feel transported (to a whole new world? Ok I'll stop), but really, the departure from everyday spice is really special. 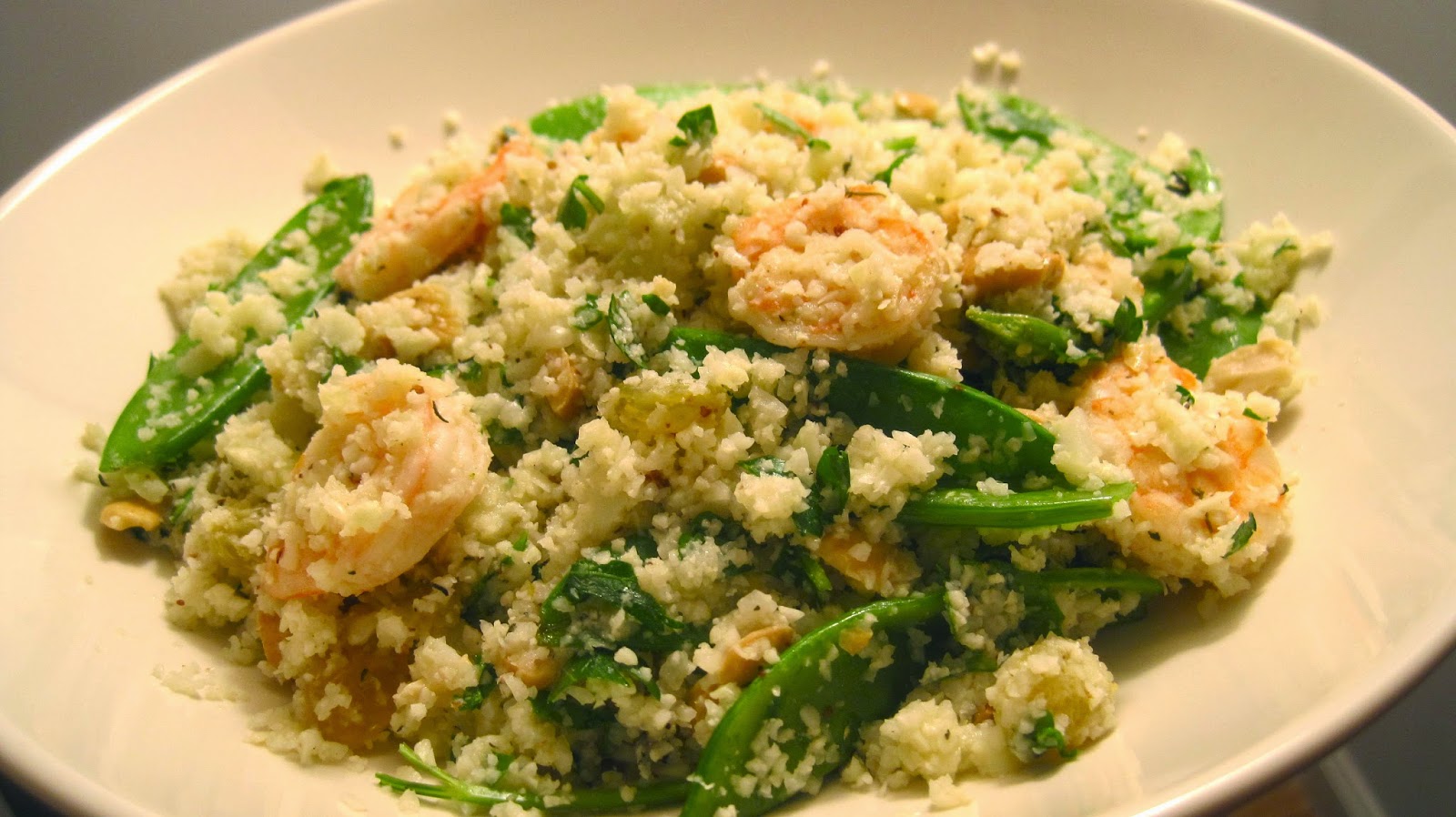 If you are not familiar with za’atar, here's the scoop. A za'atar spice blend features thyme, sesame seeds, sea salt, and sumac (the least known but most integral part.) Sumac is biting and tart, lending piquancy to this herby delicious melody of flavors.  Because I had all of these spices on hand, I made the za'atar myself following this recipe from 101 Cookbooks, although it's readily available at any specialty food store (and from what I've been told, some Whole Foods as well.) 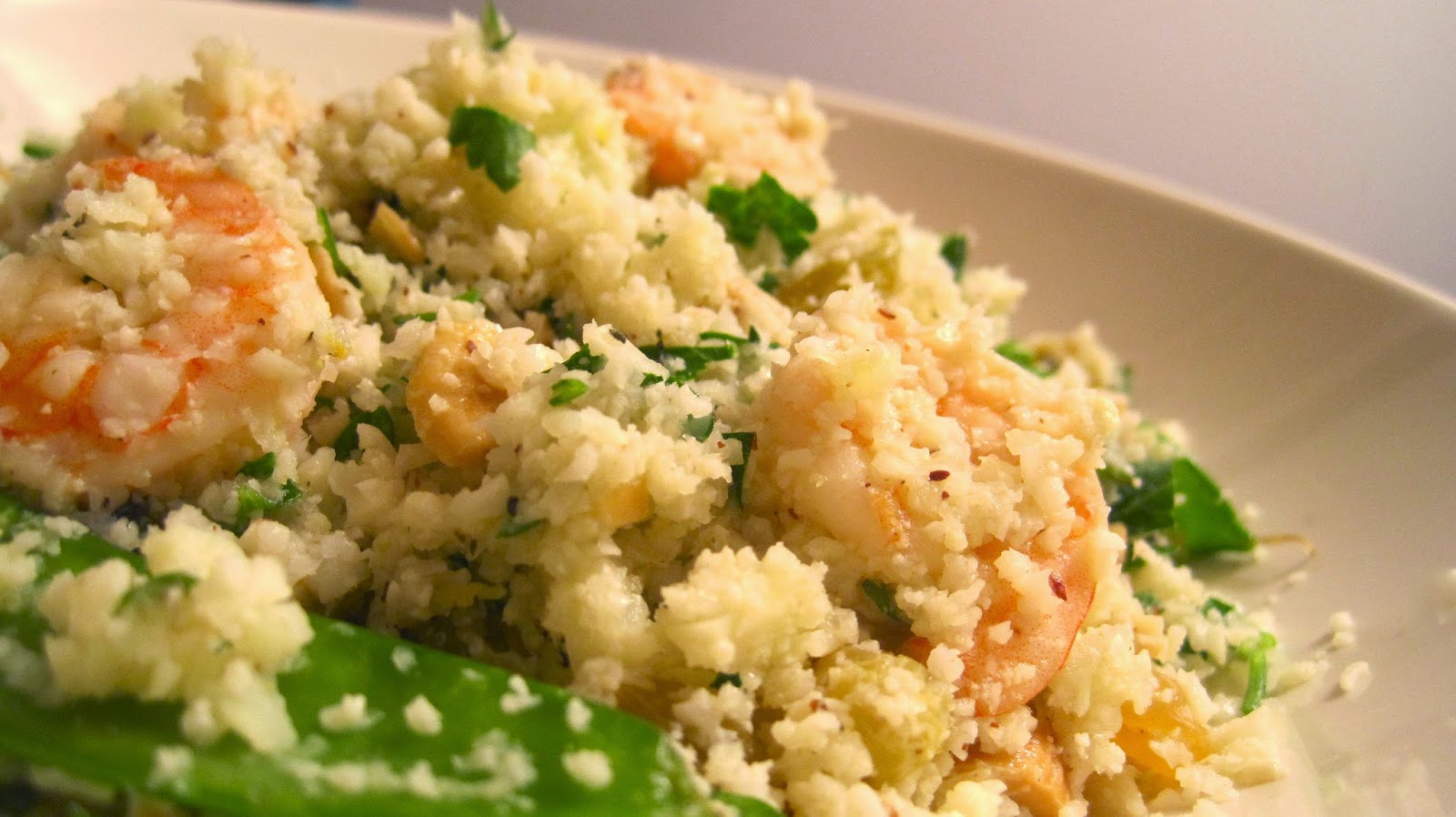 This dish was designed as a side,  so I added in shrimp and snow peas for some protein and gusto to transform it into a dinnertime main. The cauliflower couscous so closely also resembles rice, upon completion the dish looked deceivingly Asian—shrimp fried rice! But of course, the flavors were anything but: here, tart, tangy sumac and lemon zest & juice are equipoised by grassy olive oil and earthy cauliflower, sweet yellow raisins and crunchy cashews offer bites of new flavor, and juicy shrimp and snow peas contribute their substantive punch.  Yes, it's a hodge-podge of tang and taste—but one that works brilliantly at the finish line. 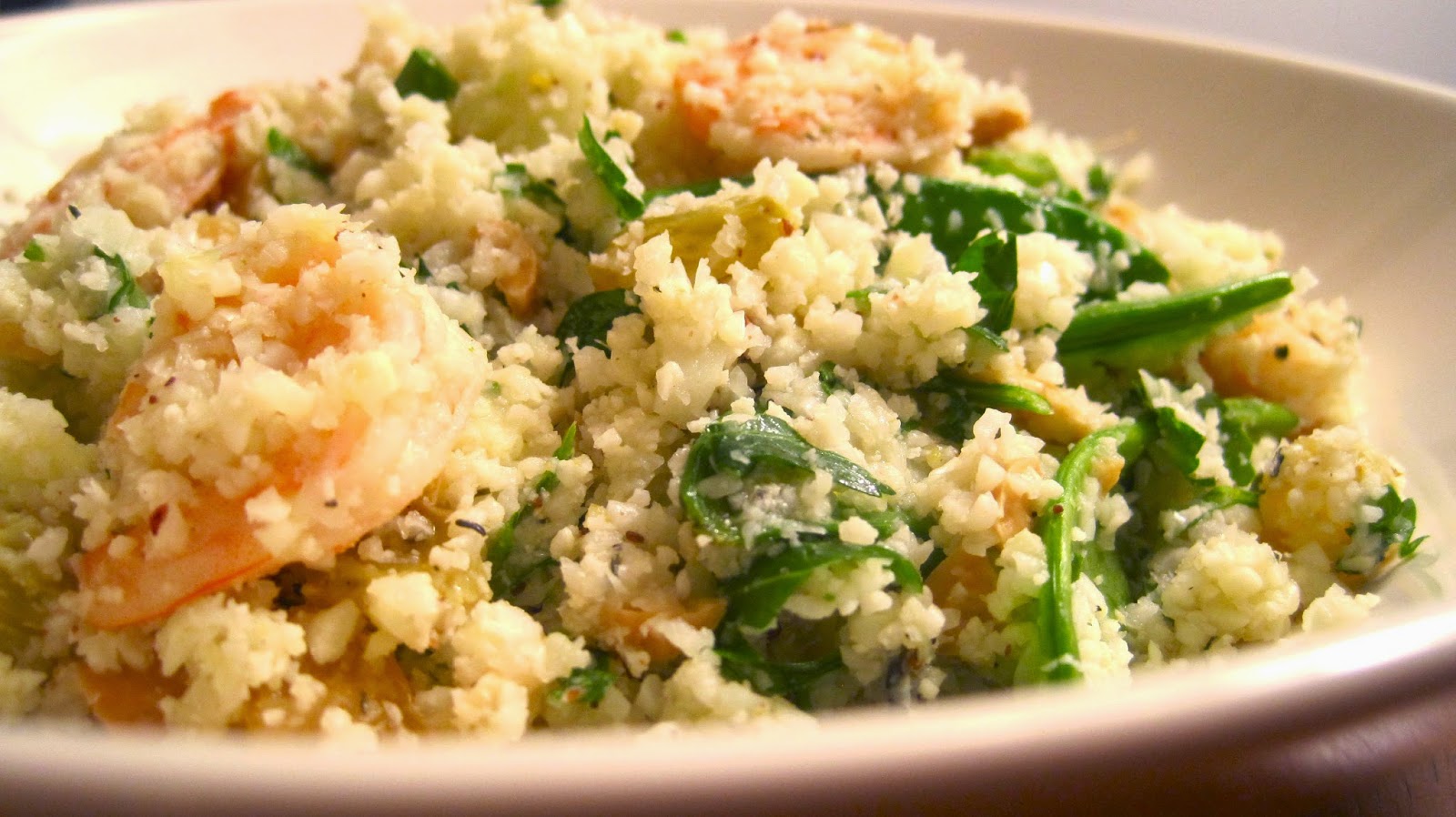 Spice Merchant Cauliflower Couscous with Shrimp and Snow Peas (adapted from QueenSashy. In addition to adding shrimp and snow peas, i greatly reduced the amount of olive oil and doubled the serving of za'atar.)
Serves 4

Directions:
1. Place the sultanas in a bowl and pour warm water over them. Leave for about 15 minutes, until sultanas are plump. Drain and discard the water.
2. Heat a cast iron skillet over medium heat. Reduce the heat to medium low, add the cashews and toast them for about 8 minutes, until lightly golden. Stir frequently to make sure that cashews do not burn. Let the cashews cool, then chop into small pieces.
3. Break the cauliflower into florets, making sure to leave behind as much of the stem as possible. Chop the florets into smaller pieces. Transfer the cauliflower into food processor in batches, and pulse until the pieces are finely chopped and resemble couscous. Be careful not to over-process.
4. In a large sauté pan, heat 1 tablespoon of olive oil over medium heat. Add the cauliflower couscous to the pan and cook for about 7 minutes, stirring frequently.
5. Remove the couscous from the heat and let it cool. In the same pan, flash-sauté the snow peas until just soft, 2-3 minutes.
6. To the couscous, add the snow peas, sultanas, cashews, za’atar, cumin, parsley, garlic, lemon zest, lemon juice, and the remaining two teaspoons of olive oil. Season with plenty of salt and pepper.
7. Leave the couscous for about 15 minutes for the flavors to combine. While the couscous is sitting, cook shrimp in the pan (1-2 minutes on each side; more if frozen).  Add to couscous. 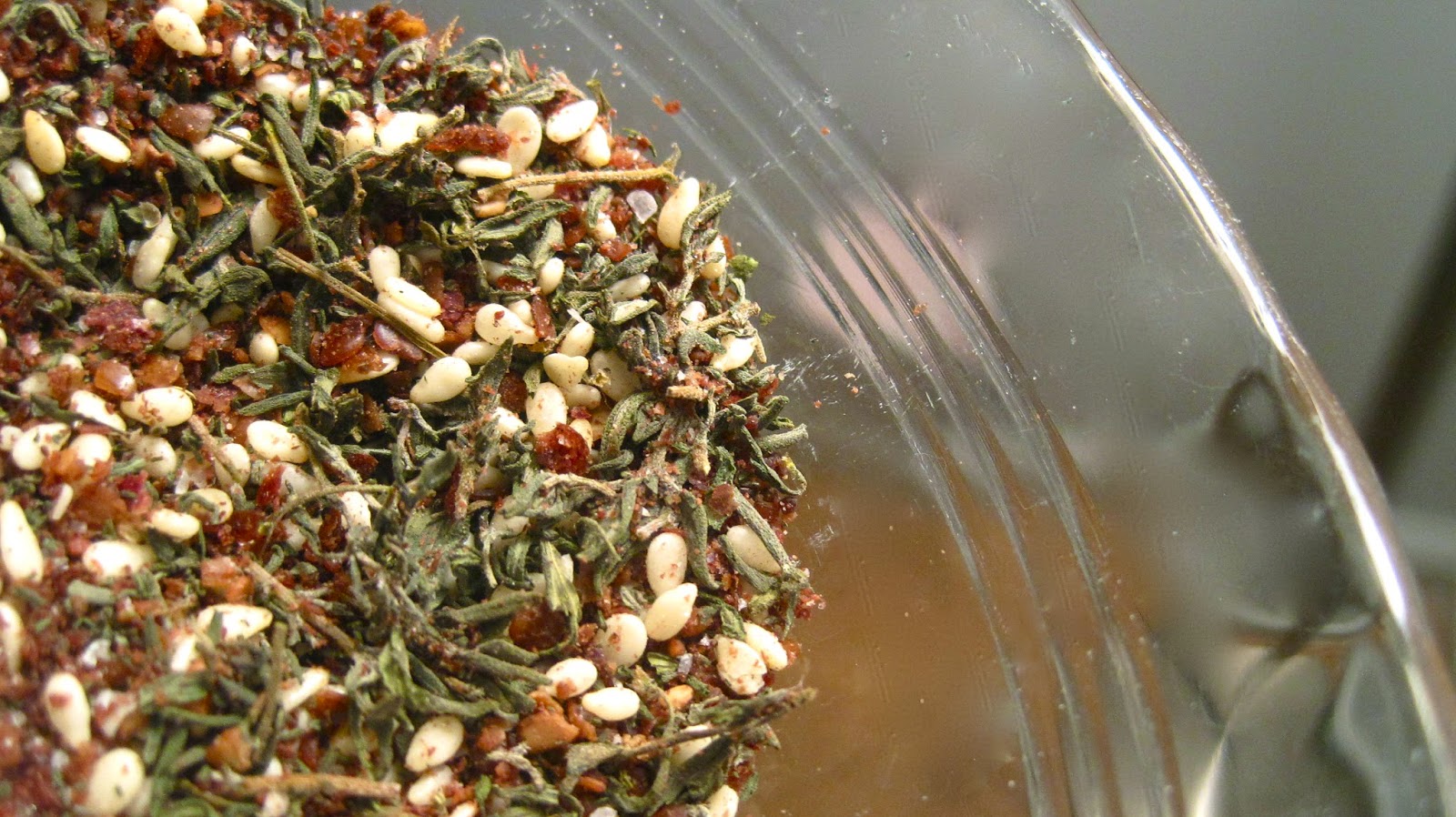 Directions:
1. Place thyme leaves on a baking sheet in a 300F oven until dry, just ten minutes or so—long enough that they'll crumble between pinched fingers. Let cool.
2. Use a mortar and pestle (or back of a spoon) to grind the thyme leave finely. If your thyme is at all stem-y or fibrous, sift to remove any larger particles. Transfer to a small bowl, and aside.
3. Crush the sumac finely with the mortar and pestle/spoon, add the salt and crush with the sumac. Add the thyme back, and grind together a bit. Stir in the sesame seeds, taste, and adjust to your liking, perhaps with a bit more salt, or sumac, or sesame seeds. Any za'atar you might not use in the coming days keeps best refrigerated (or in the freezer) if you make a double or triple batch.

Posted by rachelinthekitchen at 11:04 AM