With such a busy Fall, it’s barely occurred to me that Thanksgiving is right around the corner, and now I’ve worked myself into a pre-Thanksgiving panic about the lack of pumpkin desserts I’ve made this year.  I operate with this irrational belief that after Thanksgiving, all pumpkin desserts are rendered obsolete as we move into the realm of winter gingerbreads and puddings. As if only when the leaves are still in the trees can I dabble in pumpkin bread, muffins, pie, lattes, parfaits, cookies, squares, bars…the list goes on and on. 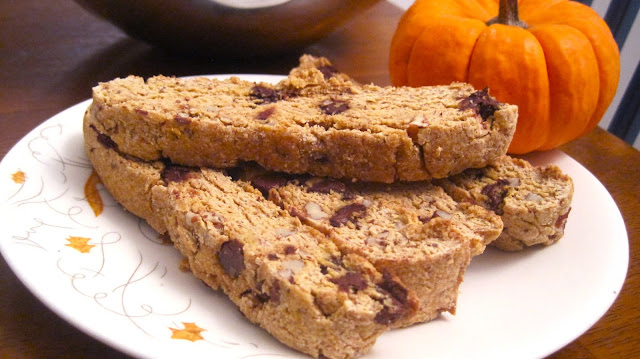 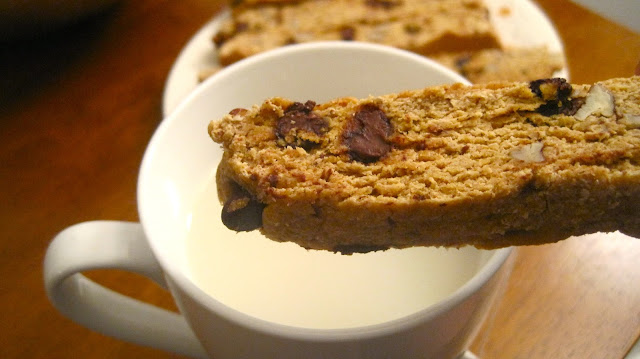 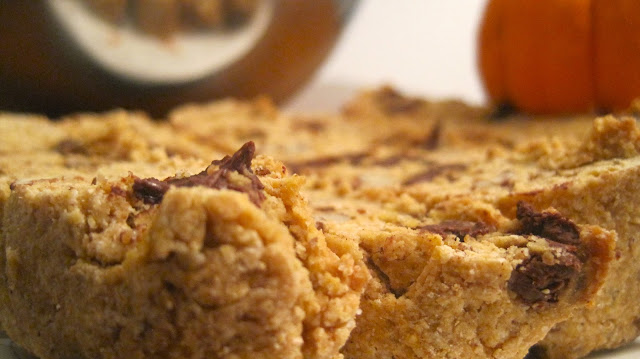 Now, I’ve been very prepared to make all of these desserts since September, when I caught wind of a potential pumpkin shortage in the US and stocked my pantry to the brim with cans of puree. “There’s going to be a pumpkin shortage,” I whispered gravely to the cashier at Trader Joe’s as he loaded up bags of my endangered squash, my eyes darting suspiciously at any one who ventured near the display. “Good luck getting all this home,” he replied. 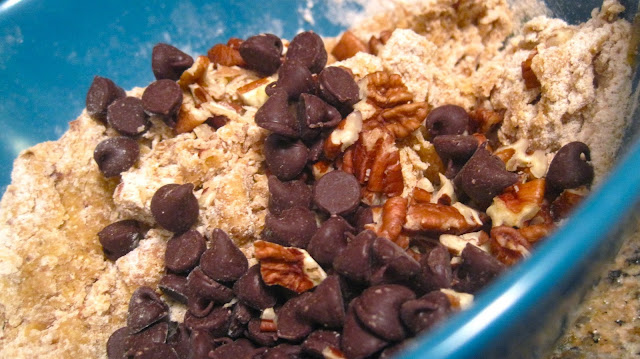 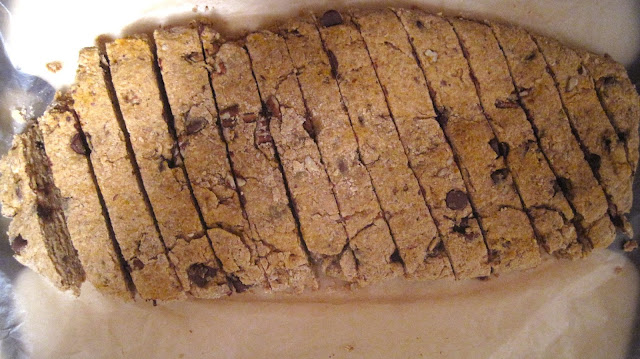 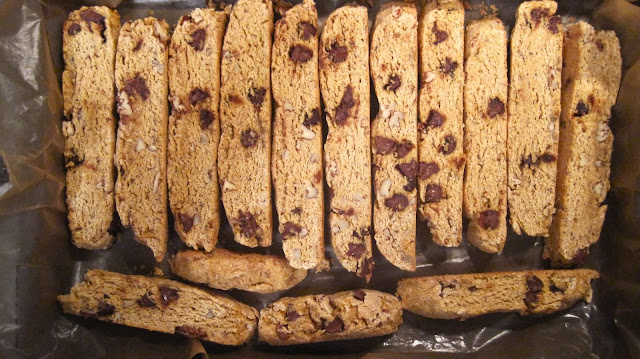 And I started off strong. I made a few pumpkin breads, but I ate them in like, three days. I was introduced to the dazzling concept of pumpkin butter, but found myself eating it by the spoonful late-night, too often. Finally, I decided I needed something pumpkiny that would last, that would allow me to consume my beloved cucurbita with abandon but also not give me that “oh my god I can’t believe I ate that WHOLE thing” feeling afterward, either. A ritualized post-dinner tea drinker,  I decided to turn to tea’s favorite cookie: biscotti.  Specifically, Pumpkin Pecan Chocolate-Chip Biscotti. 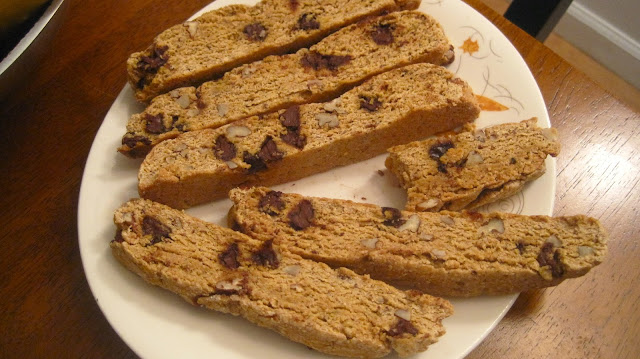 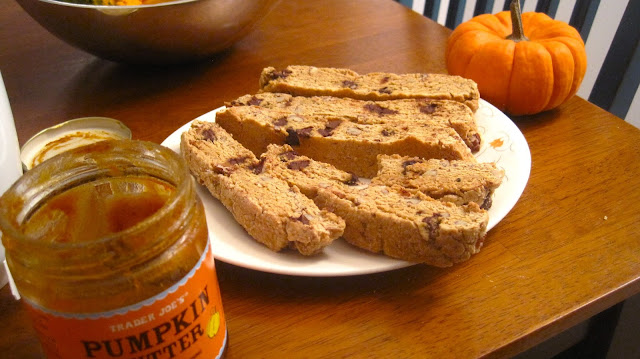 I am a total biscotti junkie, and not just because of the taste. I like how biscotti resides on the lighter side of the cookie spectrum; void of butter or oil and not too sweet. I like how the hard texture likens it to a biscuit or sweet cracker. Instead of feeling super indulgent, it feels practical, utilitarian—like a sensible fixed presence that accompanies your cup of tea or coffee. Yet, there’s just the right amount of chocolate to quench that dessert craving. Plus, the pumpkin flavor is spot on: subtle, but spiced just right to give a recognizable nod to fall. 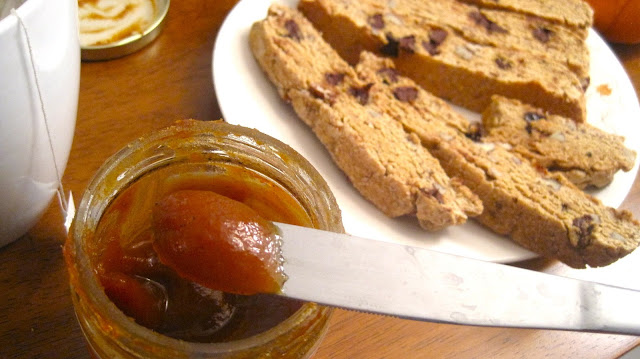 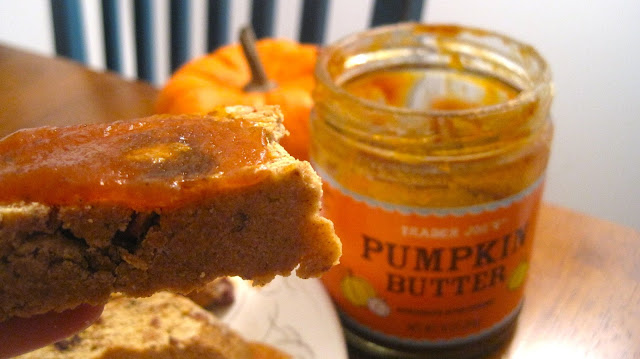 Because it is twice-baked, biscotti is a bit more labor-intensive than a regular cookie: It has to bake, cool, bake again, cool again. But once made, it lasts forever when sealed in an air tight jar, so you can count on a supply when that pumpkin craving comes knocking. I love to dip it in my tea or coffee, but you can also use it as a vehicle to spread pumpkin butter— twice as nice for those with a pumpkin vice!

Directions:
1. Preheat the oven to 350F. Line a cookie sheet with parchment paper.
2. In a medium sized bowl, whisk together the flour, sugar, baking powder, cinnamon, nutmeg, ginger, clove, and salt.
3. In a large bowl, beat together the eggs, pumpkin, and vanilla until smooth. Gradually beat in the flour until incorporated (it will be lumpy, that’s OK!) then stir in the chocolate chips and pecans.
4. On a floured surface with floured hands, lightly knead the dough. Place the dough on the parchment paper and pat out into a log that is roughly 15-20 inches by 5-6 inches, no more than ½ inch high. If dough is too sticky, add a little bit more flour.
5. Bake for 22 to ­25 minutes or until brown, set on the edges, and center is firm. Remove from the oven. Turn the oven down to 300F.


6. Cool biscotti for 15 minutes, then with a serrated knife, cut into ½ inch wide pieces. Place cut side down back onto the cookie sheet and bake an additional 15­ to 20 minutes until firm. Cool completely before eating.
Posted by rachelinthekitchen at 11:22 AM