This recipe is seasonal, healthy, creative, fun, and flexitarian. What's not to love? The "stuffing", reminiscent of Thanksgiving thanks to its signature mix of diced onions and celery, sage, and cranberries, elicits all the excitement and anticipation of the upcoming holiday. Various dried fruits plus cinnamon and nutmeg add sweetness to the quinoa, while toasted pumpkin seeds bring a fun crunch. Nestled inside an earthy Delicata squash half, this Baked Squash with Red Quinoa and Pumpkin Seed Stuffing actually looked like a hotdog! 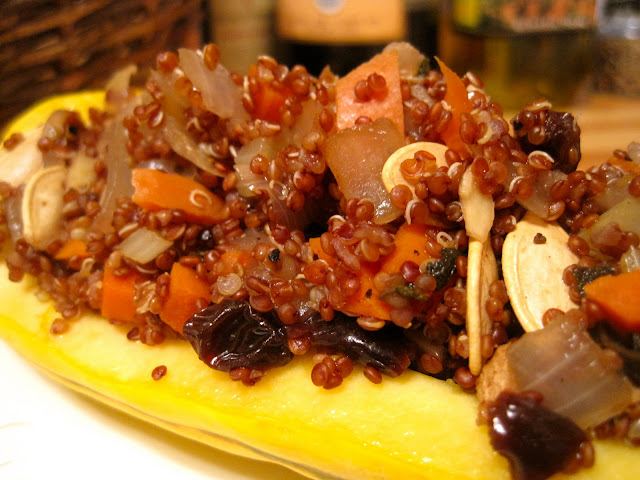 I am also digging the versatility of this dish. You can serve it as an appetizer, or toss your quinoa stuffing with chickpeas to create a balanced full meal. Feel free to scoop out the squash as you eat and mix it with the stuffing, or eat your squash half for dessert by topping it with brown sugar or maple syrup.

So what makes a dish flexitarian? Coined by Chef Peter Berley, author of The Flexitarian Table (where this recipe came from), the term flexitarian is a union of the words "flexible" and "vegetarian".  Flexitarian food is "convertable, so you can prepare a meat version and vegetarian version simultanously without going to extra trouble- you just separate the ingredients into two bowls or pots before you incorporate the protein," Berley explains.  Case in point: this recipe is originally vegan, but you could add crumbled feta if you are a vegetarian, or diced sausage if you are a carnivore.  The whole point is to include people who eat in different ways, and respecting the different needs of everyone who comes to the table. As the sister of a lifetime vegetarian, this philosophy certainly resonates with me! 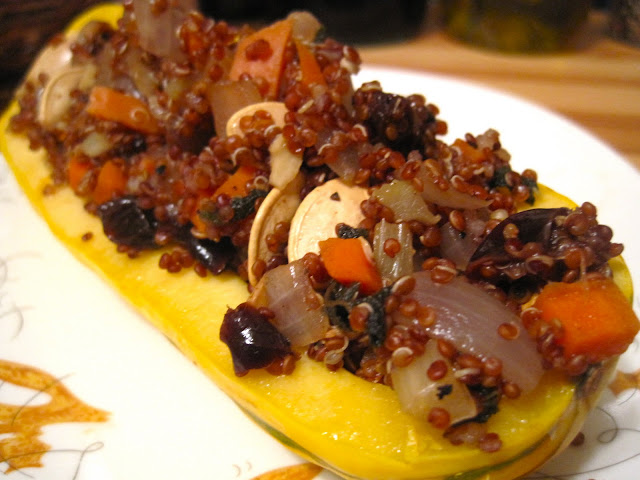 A few notes on the tweaks I made to this recipe: I completely eliminated the butter, whose absence was not missed in calories nor taste. I also felt that the dish lacked acidity, so I added a little bit of balsamic vinegar. Red wine or apple cider vinegar would be acceptable too.

Directions:
1. Adjust a rack to the middle shelf of the oven and preheat to 350 degrees F.
2. Simmer the quinoa in 4 cups of water until fluffy, 15 to 20 minutes.
3. While the quinoa cooks, melt the butter (or oil) in a saucepan over medium heat. Add the onions and 1/2 teaspoon of salt and cook until softened, stirring frequently, about 3 to 4 minutes. Stir in the carrots, celery, ginger, and sage.
4. Cover the pan and simmer until the vegetables are tender, 5 to 7 minutes (add a tablespoon of water, if necessary, to prevent scorching.)
5. In a large bowl, toss together the quinoa and vegetables. Stir in the dried fruit, pumpkin seeds, nutmeg, and cinnamon, season with salt and pepper.*
6. Brush the skin of the squash lightly with oil. Place the squash, cut side down, in a baking pan large enough to hold them in a snug single layer.
7. Pour 1/2-inch of boiling water into the pan and bake for 20 minutes (you want the squash to have softened slightly, but not completely). Transfer the squash to a plate and let rest until cool enough to handle.
8. Stuff the squash halves with the quinoa mixture, return them, stuffing-up, to the pan, and bake until the flesh can be easily pierced with the tip of a paring knife, 20 to 30 minutes more.
*Add vinegar to taste.

Posted by rachelinthekitchen at 8:48 AM