The approaching holiday season is thrillingly discernible in the New York City air. As soon as the clocks turned back, that extra hour of evening blanketed darkness seemed to give way to all the signs: lighted trees, decorated department store window displays, shopping shopping shopping. Rather than rejecting the onset of darkness and cold, all the sudden I'm ready to bask in its spirit. So what its dark at 4? Lets go hole up and drink some hotty toddys! 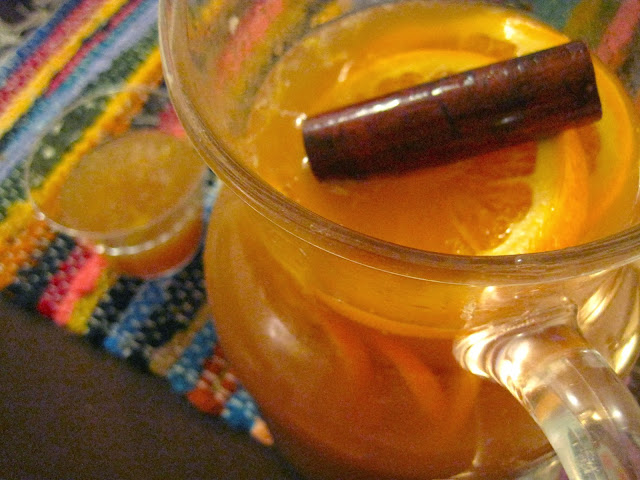 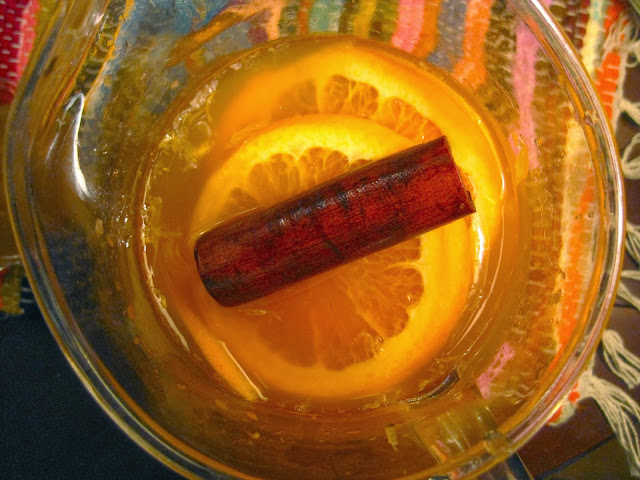 Which brings me to the best part of the holidays: the parties! And I am so excited to share with you this Chilled Whiskey Cider Punch, a must-have at your next cold-weather gathering.

Lets face it- finding the right punch can be difficult. You want complex flavors that aren't too heavy, a unique taste that also goes down easily, and most importantly, to not kill yourself in the process. A host, cook, and perfecter of the dinner party spread I may be—but mixologist, I am not. Therefore, I have no interest in running around the city like a maniac with a laundry list of pre-party errands to do, burning a hole in my wallet and schedule while I go to the umpteenth liquor store in search for pumpkin liquor or Xocolatl mole bitters. 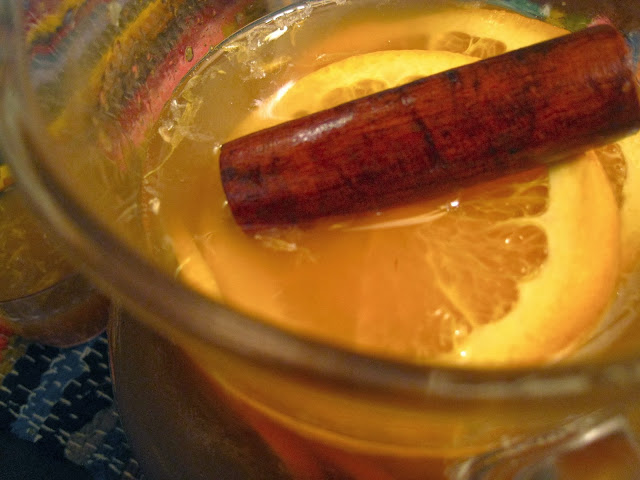 Here's a few reasons why this punch packs its own at the party.

1. The ingredients are easily locatable—and you'll use them again. I'm certainly not complaining if I have leftover whiskey or a bottle of ginger beer in my kitchen; that's a drink right there! As for the cinnamon sticks, use them to vamp up a regular coffee or hot chocolate—or boil in a pot with whole cloves to act as an autumn scented "candle" and spice up your home's signature scent.
2. The drink is pretty. It's beautiful, actually. Bright orange rounds, floating amber cinnamon sticks, and an inviting warm-hued whiskey-apple tone makes this drink totally inviting. No gatorade florescence here!
3. It takes 5 minutes to make. Preparing in advance enhances the flavors, but is not a necessary step. You can throw the ingredients into the pitcher up to 2 hours before guests arrive, and then add the ginger beer prior to serving for some bubbly effervescence.
4. It's fall familiar, without overpowering. The apple and cinnamon solidly ground this drink in the autumn season, and the smoky whiskey, fresh citrus and biting ginger work to cut the sweet while delivering their own flavor intricacies.  Saveur—where this delightful recipe hails from—describe it as combining "the fall flavors of mulled cider with the celebratory feel of a sparkling punch," officially checking off every possible requirement to satiate (slash inebriate) your thirsty guests. 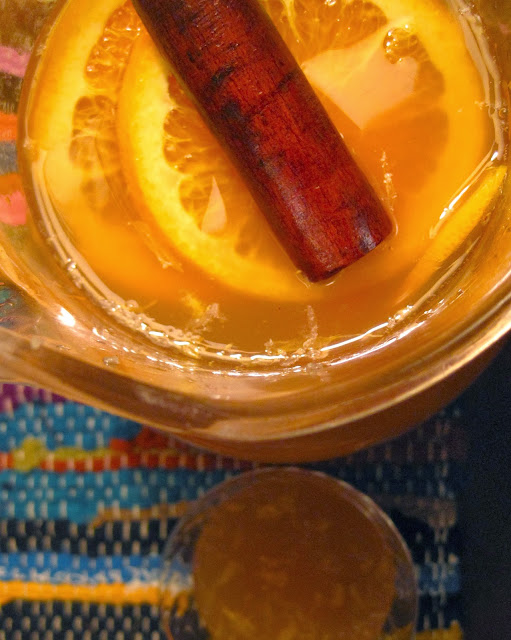 I made a few changes to the original recipe. I omitted the use of dry hard cider (expensive, sugary) and doubled the whiskey instead. The recipe called for orange bitters, but I used regular. (Go ahead if you have them, but don't go out of your way to seek them out.) This is definitely a taste-as-you-go recipe, so don't leave TOO much to do before preparing the punch :)

Ingredients:
8 cups apple cider
3 12 oz. bottles of ginger beer (such as Reed's)
2 1/2- 3 cups whiskey  (I used Seagram's 7- try to use American blended whiskey over bourbon if you can, but not essential)
Juice of one lemon
Several dashes bitters (Angostura)
1 orange sliced into rounds
Cinnamon sticks (can substitute with a few sprinkles of powder cinnamon, too)

Posted by rachelinthekitchen at 6:49 PM No comments:

This Arugula Wheat Berry Salad with Citrus Vinaigrette spawned as a necessary counterpart to an autumn butternut squash bisque for last week's dinner party menu. Knowing the butternut squash soup would speak for itself, I set out to create a simple salad, autumn inspired as well, to subserviently accompany the standout soup. 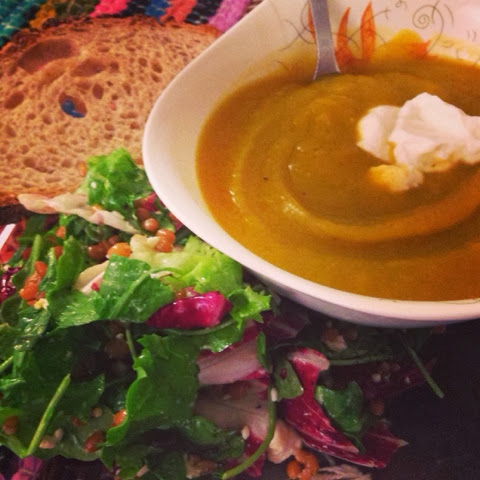 Much to my surprise, the salad proved to be just as much of a hit. Arugula is as common of a green as they come, but it was the use of seasonal radicchio—which I have to admit I often shy away from out of sheer unfamiliarity—that hearten this salad to a whole new depth. The diverse display of lettuces are gently coated in a fragrant orange-white wine vinegar dressing, and the citrusy flavors of the dressing against the bitter, spicy leaves could not be more mellifluous. 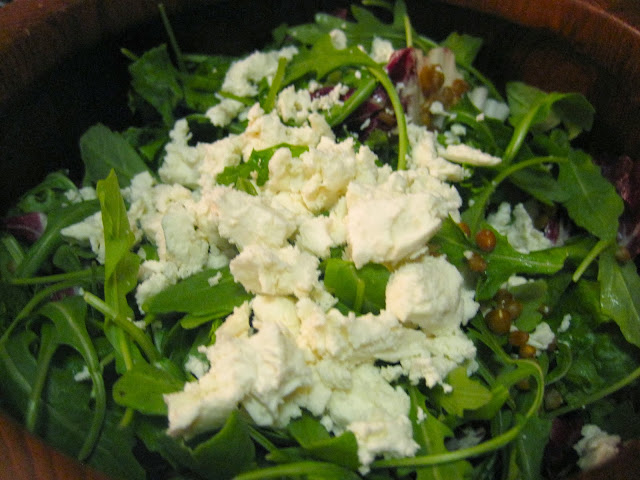 You could end the salad right there, simple and elegant. However, one thing I loved about this salad was its capacity to keep germinating into it's own main dish, if desired. Since it was being paired with the thick bisque, I chose to pebble my salad with only 3 add ons: crunchy wheat berries, oniony scallions, and salty crumbled feta. But after the soup was gone and the leftover salad became tomorrow's dinner, I added white kidney beans, sliced apple, and dried cranberries for a robust suppertime meal. 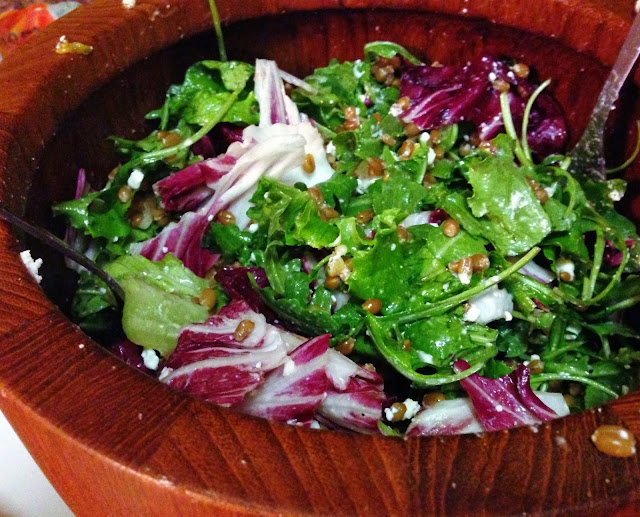 Wheat berries, although one of the most time-consuming grains to cook (they really do take at least a full hour), are also one of the most enjoyable to eat. Their crunchy, spunky texture is fun to chew, with a firmness that complements the delicate salad leaves nicely.

One could argue that a simple soup and salad is not the most sophisticated menu for guests, but a hearty squash stew (pumpkin works too) accompanied by this lovely bitter yet acidic salad is flavorful, comforting, and homey all at the same time. Serve with the most rustic loaf of fresh bread you can find, sliced thickly, and you have yourself a true winning supper.


Directions:
1. In a large bowl, toss together radicchio, arugula, and escarole or romaine. Add the wheat berries, scallions, and crumbled feta.
2. Make the dressing. In a small saucepan, reduce orange juice to a glaze. When juice has reduced and thickened, remove from heat. In a small bowl, combine the cooled orange juice, olive oil, vinegar, and ample salt and pepper.
3. Just before serving, dress salad. Sprinkle with additional chopped scallions and feta on top.

Posted by rachelinthekitchen at 5:54 PM No comments: