I’ve just returned from two weeks in Croatia and I can’t wait to share my culinary experience. Unlike most foreign countries I’ve traveled to, Croatia doesn’t pride itself on having a distinct culinary identity—rather, its cuisine is a culmination of all of the cultures and peoples who’ve inhabited the country over the years. Luckily for me, this melting pot of cultures happens to comprise all my favorite types of foods: a largely Mediterranean diet, dotted with local edible idioms.

Before we talk food, let’s talk a little history. The journey has not been easy for the Croats, who’ve been under foreign rule since basically the beginning of time and only gained their independence two decades ago. In a nutshell: you have Roman rule for five centuries starting in 11 B.C., a brief victory by the Venetians, a stretch of Hungarian domination, and battling the Ottoman Empire (Turks) from the 13th century until the 17th century.  From them on, the quest for power remains within the Slavic people: Kingdom of Serbs, Croats and Slovenes, then Yugoslavia, and finally, Croatia.

With a bit of background, the culinary traditions of Croatia start to make more sense.  From Hungary, a heavy emphasis on meat, gnocchi, dumplings, lard. In the Dalmatian Coast, where I spent my time, the cuisine is much more coastal: overwhelmingly Italian (pizza, pasta, gelato) with a heavy emphasis on local seafood and island produce like olives, capers, figs, lemons.  Wild rosemary and sage are prolific, and comprise the majority of spices used in this region. Sometimes, cinnamon and nutmeg will appear in a stew with dried fruits and nuts, a definitive Turkish overture. And wine; always, always wine!
While its origins may be scattered, the biggest unifying factor of Croatian cuisine is the pride the Croats take in their local produce and ingredients. Croatians will be quick to point out the best grapes for wine, largest lemons, and purest olive oil in the region, and even quicker to boast how they have no interest in exporting—the good stuff stays put! For example, there’s no question that on the Island of Hvar, “Golden” Plavac Mali is the sweetest crop of the indigenous red wine grape.  (It’s name is derived from the location of the vineyard, on the sunniest side of the island). When I asked if there was an interest in selling wine overseas, I was told by multiple producers that large batch production would compromise the quality of the wine. “Quality over quantity,” I was told time and time again. I was touched by this dedication to excellence, the pride in preservation. Every city we visited had a large vibrant greenmarket in, or near, its heart.
Another Croat shared with me his fondness of cold-pressed olive oil. “Heating the olive oil acts as preservative, but also raises the acidity level and subdues the flavors,” he explained to me. “The purest olive oil has no acidity, so I get mine in small batches at a local restaurant that has their own olive oil mill.” We were standing in front of a 15th century mill in Old Grablje, an abandoned village tucked inside the hills of Hvar.
Clearly, local, small-batched production is a way of life for the people of Croatia, and I was delighted to discover artisanal delicacies everywhere I went. In Hvar, we tasted homemade candied orange rind, an intensely satisfying combination of granulated sugar and bitter citrus. On the Island of Vis, cake of carob (a prominent fruit in the area) was featured on every menu. I loved the ritual of finishing every meal with a digestif: the sweet liquor was often made in-house, and featured the distillation of local carob, walnuts, fig, or cherry.
Despite the lack of overarching national cuisine, there are definitely a few dishes that Croats call on exclusively for special occasions. The first is Peka, famous for its distinct preparation: meat or fish, vegetables and potatoes slow-cooked under a bell-like dome for hours. I found it tasty but ordinary, and preferred Dalmatian specialty Pasticada, a hearty beef stew, for its more robust flavor thanks to an extensive ingredient list of spices like rosemary, cloves and thyme, and requisite dried fruits plum and fig. Pasticada is traditionally served with gnocchi, and I noticed that fish stews are often accompanied by polenta.
We were fortunate enough to visit a farm on the Island of Vis, where hardworking couple Mario (a winemaker and chef) and his wife Sonny (farmer and cook) showed us around their abode. While Mario is hard at work making grappa, Sonny is in the garden harvesting cherry tomatoes (“the sweetest in Croatia!” she insisted, and I have to agree) hot chili peppers, and rosemary. The meal Sonny served was a perfect representation of the pearls of the region: to start, we indulged in sliced tomatoes drizzled in olive oil, rosemary and salt, followed by fresh sardines accompanied by capers, pickled onions, and string beans dotted with wildflowers from Sonny’s garden. Next, we feasted on local tuna, polenta, and a confit of onions and roasted peppers in garlic and thyme. Though simple in preparation, the meal felt positively gourmand, thanks to the exceptional freshness of the ingredients and the beaming smile on Sonny’s face as she served each course.

If I can sum up my one culinary takeaway from my trip to Croatia, it is this. Revel and delight in local foodstuffs served simply. Keep them naked to showcase their freshness, their superiority, their stellar state on their own turf. At home is where they shine. Does pride in your country’s produce make your food taste better? Maybe not, but served on a terrace shrouded with bougainvillea and lemon trees, with a glass of wine par excellence thanks to a plethora of sunshine on its grapes, to the nema problema (no problem) easy, languid disposition of your contemporaries, there’s an undeniable spark that makes eating here feel so luxurious, so right.
Posted by rachelinthekitchen at 7:57 AM 1 comment:

As some of you may know, I got married this weekend (!!!), and it was very important to me thoroughout the course of wedding planning that I introduce some element of my blog into my nuptial celebration. It's a big part of my identity! So, as cooking is only second to my love all things alliterative, rhyming and witty, I created Kvell in the Kitchen: Wedding Edition. This alter ego has shown herself once before in the Soft Chocolate Almond Cherry Cookies Post, and re-emerges again for an end-of-wedding-night treat featuring Inna Garten's Chipotle and Rosemary Roasted Nuts. 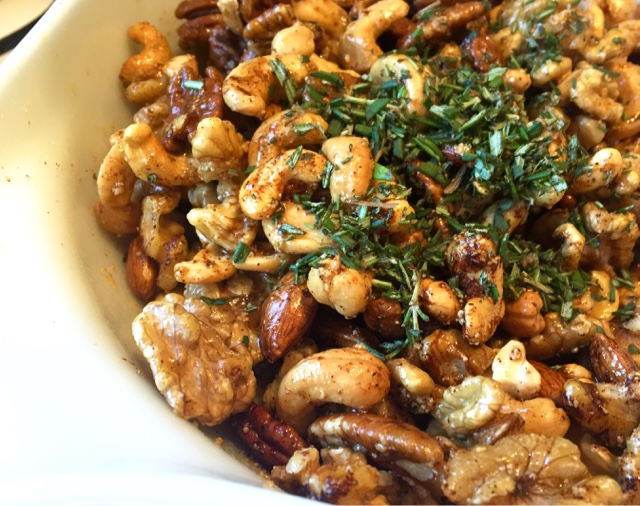 There were many contenders vying for the spot of wedding day giveaway, and the criteria was stringent. You had to be a crowd-pleaser (snacky, easy to eat), a perfectly balanced combination of salty, savory and sweet, big-patch perfunctory, and have a name with a pun. Oh, paprika roasted chickpeas? Don't you mean, Two [Chick]Peas in a Pod!? But then, you had to last a week at room temperature too...sorry moldy chickpeas. You were so good when you were fresh. 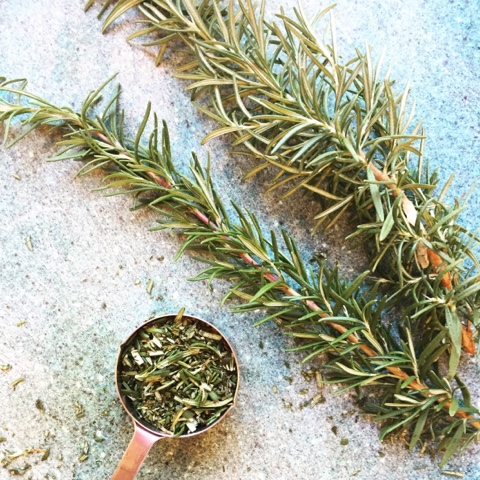 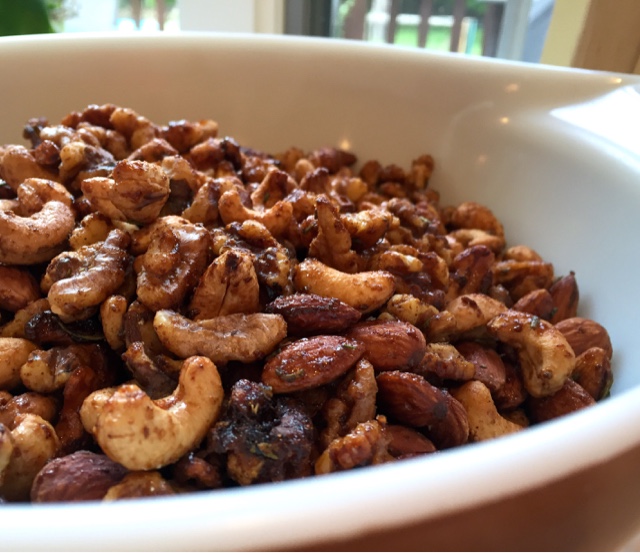 At some point in this process, I recalled a friend's amazing nut mix; one so tasty it stood out in my mind though I hadn't tasted it for years. It seemed like the type of recipe that had been sustained through generations, but ironically, it was from Food Network! Anyway, these nuts past the test. They are smoky and spicy thanks to a generous smattering of chipotle powder, citrusy-sweet due to maple syrup and fresh orange juice, and fireplace-cozy herbacious thanks to generous fresh rosemary. And they're salty, thanks to, uh, salt. 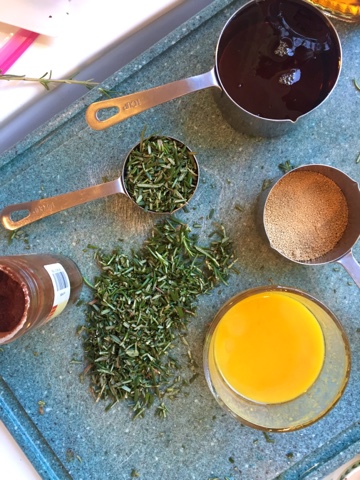 With such as a spot-on flavor combo I knew I couldn't lose, but they had to pass the storage taste-test, and a batch divided (if I ever write a novel this will be it's title) lived in the freezer, fridge, and at room temperature for a week. I conducted a blind test of each nut (sample size: 4 people) and everyone had the same reaction: they were just as good as on the day they were made, and no one could tell the difference between the three.  I suspect the shelf life is pretty long. 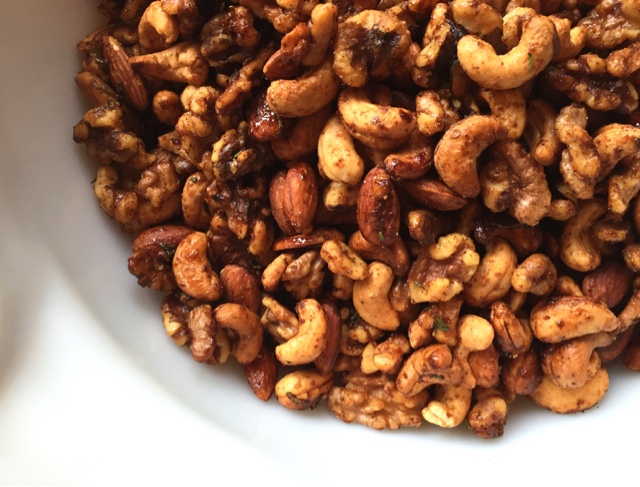 The witty name? Rachel and Adam, nuts about each other! (Also just plain nuts). Enjoy this recipe, it is so relevant as we approach the Fall holiday season. I'll see you again in two weeks after my trip to Croatia, hopefully armed with at least one peka recipe, the signature dish of the Dalmatian Coast. 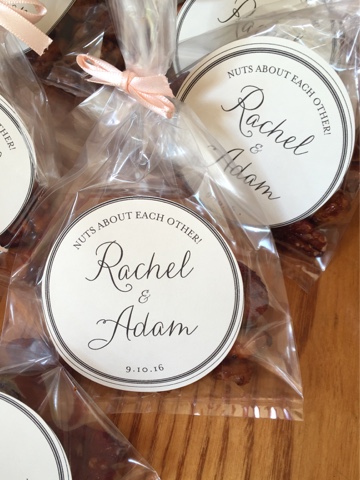 Directions:
1. Preheat the oven to 350 degrees.
2. Brush a sheet pan generously with vegetable oil. Combine the cashews, walnuts, pecans, almonds, Canola oil, the maple syrup, brown sugar, orange juice, and chipotle powder on the sheet pan. Toss to coat the nuts evenly. Add 2 tablespoons of the rosemary and 2 teaspoons of salt and toss again.
3. Spread the nuts in one layer. Roast the nuts for 25 minutes, stirring twice with a large metal spatula, until the nuts are glazed and golden brown. Remove from the oven and sprinkle with a pinch more salt and the remaining 2 tablespoons of rosemary.
4. Toss well and set aside at room temperature, stirring occasionally to prevent sticking as they cool. 5. Taste for seasoning. Serve warm or cool completely and store in airtight containers at room temperature.
Posted by rachelinthekitchen at 1:48 AM 1 comment: